Ubuntu began the year on a buoyant note, carried high by a wave of (much-needed) positive press resulting from the release of Ubuntu 17.10 ‘Artful Aardvark’ a few months prior.

But with a new long-term support release looming large, a reimagined installer to debate, and a gaping memory hole to plug in GNOME Shell, the rest of 2018 was a little less plain sailing for Ubuntu’s engineers!

In this post we take a look back at Ubuntu’s key moments in 2018, plus give a shout-out to the notable Snap app releases that showed up along the way…

January: Things To Do

Ubuntu started the new like most people do: on an organisational kick.

Talking of Ubuntu 17.10, January 11 saw a re-release of Ubuntu 17.10 ‘Artful Aardvark’. Earlier images were said to contain a bug that could ‘brick’ a specific series of laptop simply by trying to install Ubuntu.

Elsewhere in the community, GNOME confirmed its plan to remove desktop icon support from Nautilus. This controversial change would see Ubuntu opt to ship an older version of the famous file manager in all of its 2018 releases.

News that Ubuntu was to start collecting user data worried many, but an up-front and honest approach soothed any would-be controversy.

This month also brought you word that a “minimal install” option was to feature in the then-upcoming release of Ubuntu 18.04 LTS.

It’s also been a knock-out year for Snapcraft, Canonical’s new-fangled app format. A slew of major software vendors adopted the format this year, including Microsoft, Mozilla and JetBrains.

March saw the GNOME Shell desktop thrust into the spotlight after a major GNOME Shell Memory leak was uncovered.

The Linux community got stuck in to tackling it, with Ubuntu devs joining GNOME devs to help narrow down and solve the issue.

April’s Ubuntu 18.04 LTS release arrived to throngs of anticipation. Those choosing to upgrade to Ubuntu 18.04 from 16.04 were in for a shock: new desktop, new workflow, new everything!

The arrival of the Bionic Beaver gave us much to coo over, including a bold new look to Nautilus courtesy of a refreshed Ambiance GTK theme.

Spring heralds the arrival of new things, and Dell duly obliged.  The computing powerhouse unveiled a bountiful batch of new Linux-loaded Dell workstations and laptops, including the Dell Precision 3530 Developer Edition, in late May.

Mark Shuttleworth chose this month to sound out his idea for a ‘Next Gen’ Ubuntu Installer that pairs modern technologies like Electron, Curtin and Snappy. Although the new installer has not, at the time of writing, materialised, it remains firmly on the Ubuntu devs “to do” list.

Finally, May brought word that both Ubuntu MATE & Ubuntu Budgie will drop 32-bit ISOs from their releases going forward. They weren’t the first  (Ubuntu dropped 32-bit builds in 2017) nor the last: Xubuntu announced in December that it too will follow suit, and embrace a 64-bit only future.

Summer’s first blush brought with it the first of two big-name buy-outs this year, as Microsoft bought GitHub, the hugely popular and influential code sharing hub (used, more and more these days, for Ubuntu development too).

Aside from costing a crazy amount of money the move didn’t quite net Microsoft the insta-kudos is sought. The deal was greeted met with caution and suspicion from many in the free and open source software community, with rival service Gitlab seeing an appreciable uptick in new users.

June also welcomed the arrival of Linux Mint 19 ‘Tara’, the first version of the popular Ubuntu-based Linux distribution to be based on Ubuntu 18.04 LTS. Sporting native Flatpak support, a new welcome app, and a new GTK theme, the release was naturally a big hit with FOSS aficionados.

Elsewhere, fans of big things in small packages found something to enjoy as Intel’s 7th Gen NUCs got rubber stamped as “Ubuntu Certified”.

July brought us the first point release of Ubuntu 18.04 LTS. The newly refreshed ISO images pack in a number of critical bug fixes and security patches. This was the month that Canonical sent out the ‘upgrade signal’ to those on Ubuntu 16.04 LTS.

And it’s a release many will have been eager to upgrade to following publication of the UK Government List of Ubuntu 18.04 LTS Security Tips.

Elsewhere, a promising new new name for the Communitheme was revealed; Google Chrome got a new look; the Canonical made it easier to find Snap apps online; and a new infographic laid bare Ubuntu’s recent success.

In the wider community, SUSE got sold in a $2.5 billion deal.

By mid-summer things were truly in bloom.

Dell — yes them again — took the factory wrapping off of its cheapest XPS 13 yet (powered by Ubuntu, of course). A stunningly thin model with top specs, a fab screen, and a more acceptable price tag.

A slate of Ubuntu-based distros showed off their best sides, including new releases of the nimble ‘n’ niche Bodhi Linux 5.0 and the thumping Zorin OS 12.4. The fifth point release of Ubuntu 16.04 also landed this month, ready to massage those not keen to lose the Unity desktop so soon.

The fall-out from GNOME’s decision to rip out desktop icons from Nautilus saw Ubuntu 18.10 Ship with an older version of Nautilus.

It was also the month of new looks. The ‘Yaru’ theme landed in Ubuntu 18.10 while venerable email client Thunderbird got a new look, new features, and a new logo.

Popular “not a distro” distro KDE Neon upgraded to Ubuntu 18.04 LTS. As well as security and performance improvements the uplift grants Neon users access to newer versions of many core apps.

On the blog we previewed Ubuntu’s plans for a major Software Center revamp that will mix app listing with curated editorial content, à la the Apple App Store.

Although a competent release, wider community reception to Cosmic has been mostly muted. But with a change-log boasting mostly iterative improvements to the GNOME Shell desktop, and a new GTK theme, I guess there simply wasn’t an awful lot for folks to get excited about…

Having started collecting user data earlier in the year it wasn’t until October that Canonical was finally ready to share the details with the wider world through the launch of a dedicated Ubuntu User Statistics webpage.

Eyes forward, the name of Ubuntu 19.04 was revealed this month, and Ubuntu MATE introduced quasi-official support for the GPD Pocket laptops through a set of bespoke ISO images.

Oh, and this was the month that saw a terribly minor and not-at-all-newsworthy deal in which IBM bought Red Hat for $34 billion…

Winter got underway with Ubuntu 19.04 Daily Builds made available to download

Samsung’s promising Linux on DeX hit beta. The ingenious tech lets owners of the smartphone giant’s latest high-end handsets run a full Ubuntu desktop from their phone when docked to a monitor and keyboard.

Ahh, the month of mince pies, merriment and a fresh new Linux Mint release. The last version of the hugely popular Ubuntu-based distro brings a new look, an improved layout, and updated apps.

For Ubuntu proper, the hum of work on the Disco Dingo continues, with plans to change Alt+Tab behaviour, add a GNOME clocks and tracker to the default install, and creating a special settings area for managing Canonical Livepatch.

In flavour related news, Xubuntu announced it will no longer offer 32-bit builds for 19.04 or beyond. 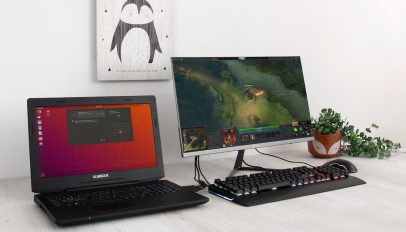 The Slimbook Eclipse: Powerful Enough to Put Other Linux Laptops in the Shade?
Read Next