The fifth (and final) point release of Ubuntu 16.04 LTS is now available to download.

Ubuntu 16.04.5 LTS combines all bug fixes and security updates issued to the OS since the last point release went live with an updated kernel and graphics stack.

The end result is an updated install image that will need fewer post-install updates, plus better-than-ever hardware support and performance.

Ubuntu 16.04 LTS is supported by Canonical with ongoing security, bug and software updates for five years from release. Along the way new installers are created that feature an updated kernel. These are called “point releases”.

If you want to do a fresh install of 16.04 LTS this is the image you should use.

While there’s not a lot “new” to see in a point release there is plenty of newness to feel.

The Ubuntu 16.04.5 LTS install image rolls together all of the bug fixes and security patches released to Xenial Xerius since the last point release back in March. The updated installer helps keep fresh installs feeling fresh.

Below is a chart showing the kernel support schedule for Xenial:

As you can, this is the final major kernel update this release will get, and is supported until EOL.

If you install Ubuntu 16.04 LTS using the installer images released today you won’t need to install as many post-install updates as those who use an older install image. You will also get the Linux kernel 4.15 as standard, out of the box.

If you run Ubuntu 16.04 LTS already you don’t need to do anything special to get this “release” — you’re technically running it already.

That said, if you made your Ubuntu 16.04 install way back in April 2016 (and you haven’t opted-in to receive HWE updates since) you will not get the new kernel or graphics stack until you opt-in.

And to do that you need to install the HWE kernel.

The Ubuntu wiki has full details on how to get HWE updates. Just run this command:

If you need to download Ubuntu 16.04.5 LTS you’ll find the ISO images (for both 32-bit and 64-bit PCs) you need on the Ubuntu releases server, using the links below; 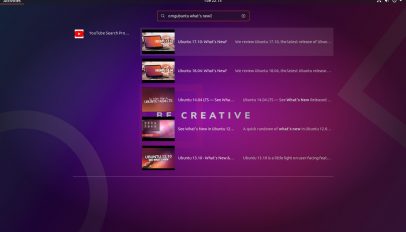