Canonical has confirmed that Ubuntu 14.04 Extended Security Maintenance (ESM) support will be available from next year.

Ubuntu 14.04 LTS ‘Trusty Tahr’ will reach end of life (EOL) in April 2019, but Canonical is aware that not everyone running or relying on the release is in a position to upgrade right away.

Which is where Ubuntu 14.04 ESM (Extended Security Maintenance) comes in.

Ubuntu 14.04 ESM is not something the average Ubuntu desktop will need

After this date standard official support ends for most.

But developers, system admins, organisations, or anyone else either unable or unwilling to upgrade to a newer Ubuntu release can choose to purchase Ubuntu 14.04 Extended Security Maintenance (ESM) support.

ESM gives organisations and mission-critical service providers a protected buffer in which they can plan their migration to a newer Ubuntu release — one offering full support — without being left vulnerable to security issues uncovered in the interim.

“Organisations use [Ubuntu] ESM to address security compliance concerns while they manage the upgrade process to newer versions of Ubuntu under full support. The ability to plan application upgrades in a failsafe environment continues to be cited as the main value for adoption of ESM,” Canonical says of its offering.

ESM is not a free lunch

ESM is offered as part of Ubuntu Advantage (which costs from $150/year for desktops and from $750/year for servers) or it can be purchased separately.

This isn’t the first time Canonical has extended the support window of an LTS release. Last year it launched Ubuntu 12.04 ESM, which has gone on to provide Precise Pangolin users with hundreds of high and critical security patches.

As welcome as Ubuntu ESM is it’s not something that your average Ubuntu desktop will need.

After all, desktop users can install or upgrade to a newer Ubuntu release with little risk.

On servers, cloud or managed enterprise desktops, where upgrades need to happen across multiple systems with no interruption or “upgrade issues”, things aren’t …Well, they aren’t quite so straightforward.

Although one might argue that the regular LTS support period is long enough to plan an upgrade strategy the fact that Ubuntu 12.04 ESM proved popular enough for a repeat suggests that a lot of people really don’t like fixing what isn’t broken!

Ubuntu 14.04 LTS was released back in April 2014, carrying the “Trusty Tahr” codename. It was a pretty solid release, as our release video from the time will remind you… 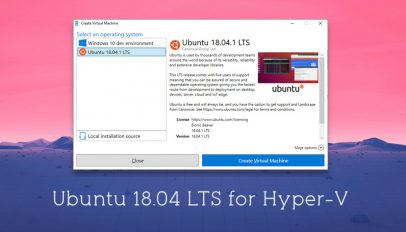 Microsoft Announce Enhanced Version of Ubuntu 18.04 for Hyper-V
Read Next