A new version of Thunderbird is now available to download.

Thunderbird 60 is the first stable release of the ephemeral desktop email client since the launch of Thunderbird 52 way back in early 2017.

A year in development — but has it been worth the wait?

From the off it’s obvious that Thunderbird 60 delivers a fistful of new features, fixes, and refinements.

It now comes dressed in the “Photon” theme made famous by its former stable mate Firefox.

To this end, Thunderbird’s tabs are now square, you can turn the title bar on and off, and a pair of (optional) light and dark themes come included by default. 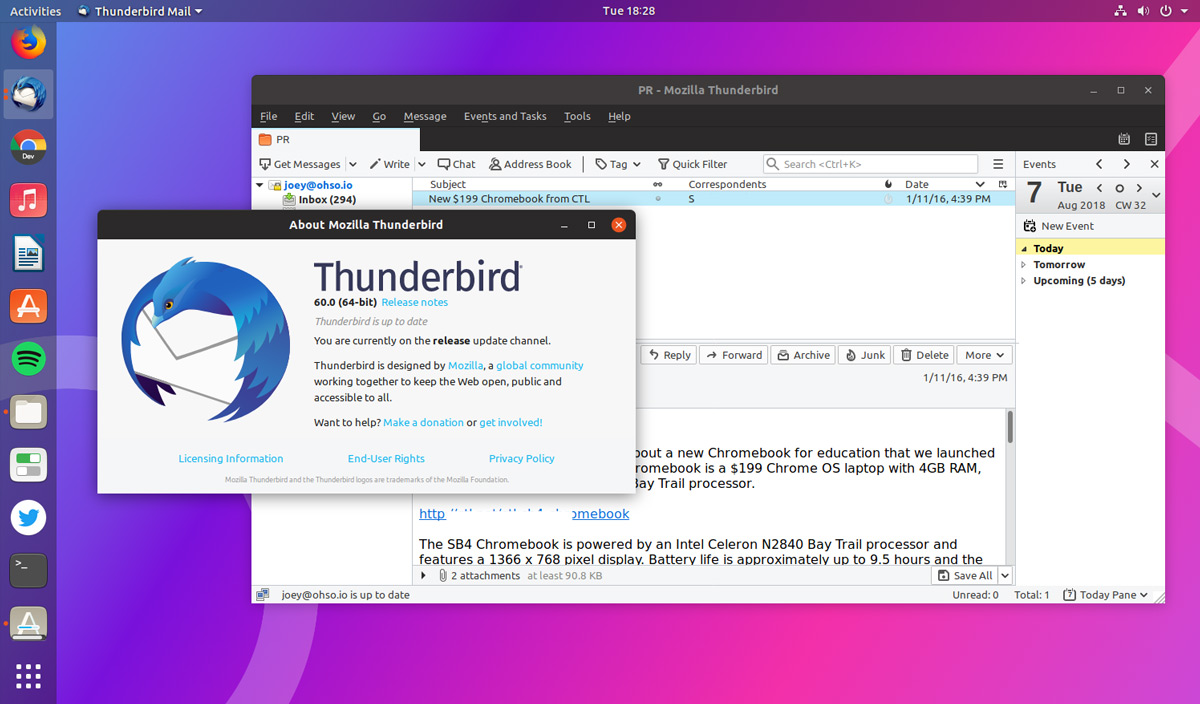 Similarly, Thunderbird 60 makes use of Mozilla’s Rust-based tech, including the Quantum CSS engine that is based on Servo for better UI responsiveness.

On Windows the Photon UI “looks right”. On macOS and on Ubuntu, which uses softer, less-angular system themes by default, not so much.

Side note: If you love Thunderbird but find the Photon UI isn’t half as modern as you’d like do check out the superb Monterail Thunderbird theme. It totally transforms the look and feel of Thunderbird.

It’s now possible to reorder attachments, and open the attachment pane using a keyboard shortcut, while a new paperclip icon will appear in the compose window when the mail you’re writing has attachments (this should help avoid any accidental forwarding of documents).

A stack of IMAP bug fixes also feature, as does better error handling for Gmail authentication and support for OAuth2 authentication when adding Yahoo! Mail and AOL mail accounts.

Check out the Thunderbird 60 release notes for a more in-depth look at what’s new.

You’ve read what’s new and improved in Thunderbird 60, and now you want to know how to install it.

You cannot upgrade to Thunderbird 60 in-app from Thunderbird 52 or earlier. You have to download and install manually.

(This detail won’t derail Linux users, but I’m sure a few of you who also use this open-source email app on your Windows or macOS dual-boots, so it’s something you should be aware of).

Anyone (still!) running Windows XP or Vista will, alas, find this version is out of their reach entirely. Thunderbird 60 deprecates support for deprecated versions of Windows.

You can download Thunderbird 60 directly from the project website as an installer (Windows, macOS) or a standalone binary (Linux):

The Linux binary is ideal if you don’t want to wait until your distro makes this update available to you. Both 32-bit and 64-bit builds can be downloaded from the page above. To use ’em just download and extract > enter folder > and double-click on ‘thunderbird’ inside to run.

Will I get this Thunderbird Update on Ubuntu?

At the time of writing you can’t upgrade to Firefox 60 on Ubuntu using a third-party PPA, the Mozilla Beta PPA, or another external repository. The situation may be different on other Linux distributions, such as Arch.

Are you a fan of the new look? Digging the dark theme? Let us know!
Apps Download email email client Mozilla thunderbird