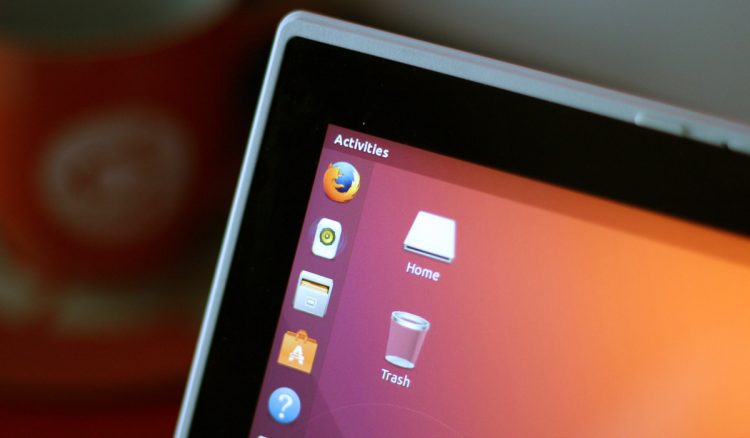 As one might expect from a release arriving ahead of the next Long Term Support release (Ubuntu 18.04 LTS, due April 2018) Ubuntu 17.10 is packed full of big changes and makes use of many new technologies.

Read on for our full Ubuntu 17.10 review, but do brace yourself because, aptly for an autumn release, change is most certainly in the air…

Read on for a comprehensive rundown covering all the key new features, changes and updates included in the ‘Artful Aardvark’. 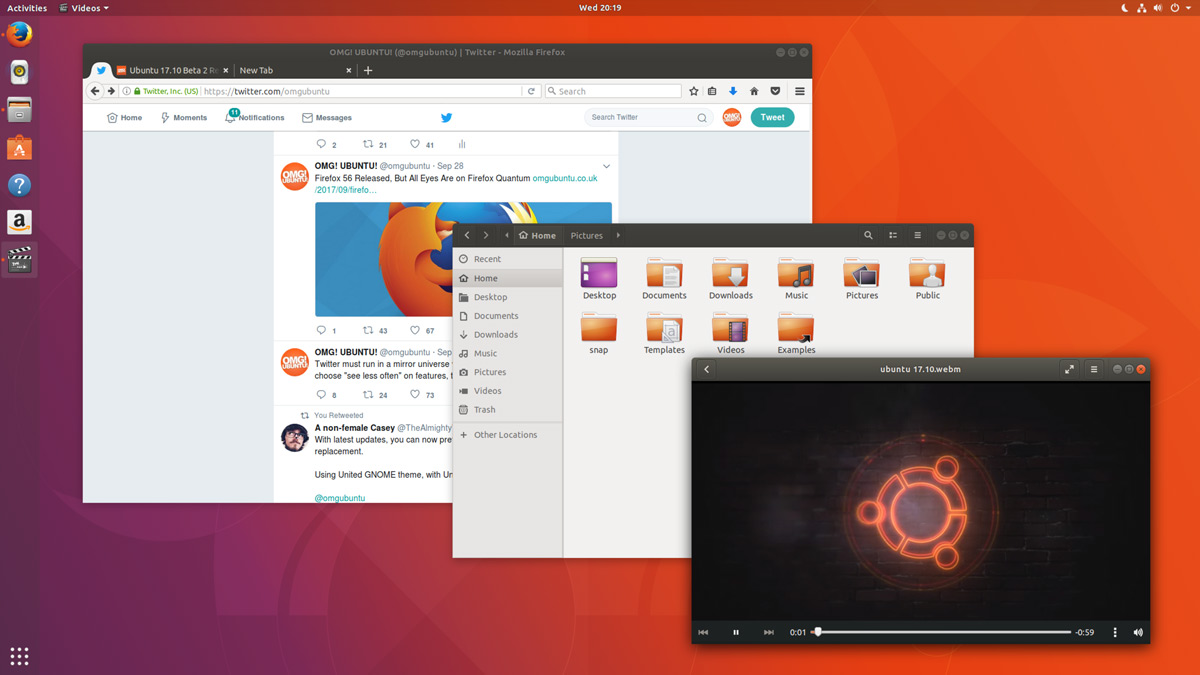 Ubuntu is the world’s most popular desktop Linux operating system, and with its latest short-term support release, it’s clear Canonical want to keep a firm grip on the title.

After years of ‘footnote’ releases that brought only minor tweaks, the ‘Artful Aardvark’ brings all-out with change, ready to usher in the new era.

So rather aptly for a release that begins with the first letter of the english alphabet, Artful Aardvark is the first version of Ubuntu to ship with the GNOME Shell desktop installed by default.

Yup, the Unity desktop, once Ubuntu’s core USP, has been unceremoniously relegated to “available in the archives”. Ubuntu joins the fold with its fellow Linux distros in opting to use upstream GNOME — but naturally puts its own distinctive stamp on things.

In Brief: Ubuntu 17.10 is a sizeable upgrade to this Linux-based operating system. It debuts with a new desktop shell, a new display server technology, and makes major user-interface and user-experience changes.

Ubuntu 17.10 Debuts with An All-New Desktop 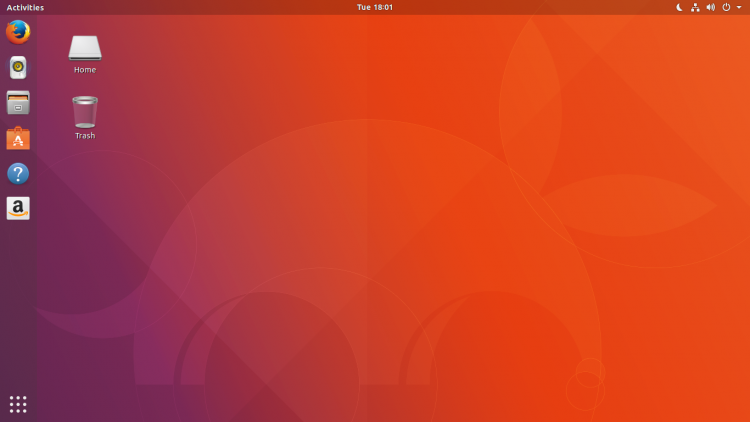 This is the first version of Ubuntu to use GNOME Shell as the default desktop.

‘The HUD, global menu, and other Unity features are no longer included’

By choosing to drop Unity most of Ubuntu’s home-grown usability efforts also fall by the wayside.

Innovations like the HUD, global menu, sound menu, notify-osd, and many other much-loved Unity desktop features are no longer included. A few of these have analogous replacements (e.g, sound controller, notification system) but others do not (e.g., HUD).

In Unity’s place comes a bespoke version of GNOME Shell that is ‘customised’ to resemble something that’s superficially close to the Unity desktop layout (but is not a like-for-like replacement).

The Ubuntu 17.10 desktop uses a two panel layout: a full-height vertical dock sits on the left-hand side of the screen, while a a ‘top bar’ is stripped across the top. 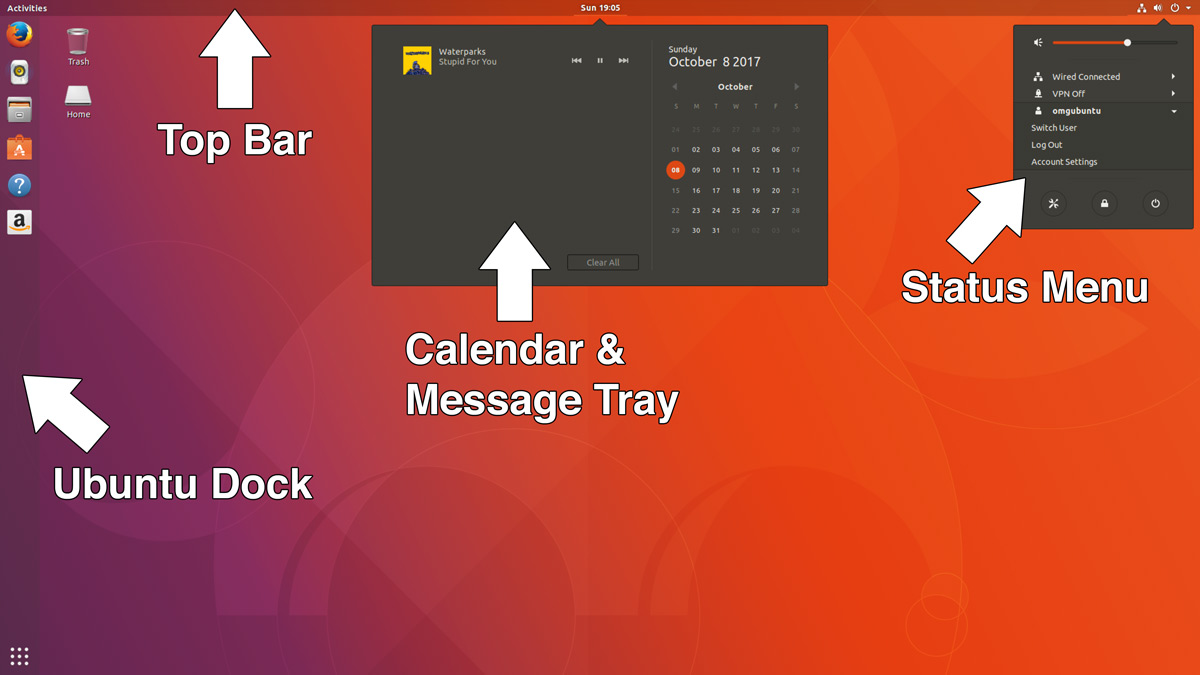 The new Ubuntu Dock is both a task manager and an application launcher. It shows icons for open and running software windows (denoted by a dot) as well as ‘pinned’ launchers for your favourite apps.

The dock is also global; it displays icons/applications from all workspaces regardless of which one you’re actually viewing.

Both the Ubuntu Dock and the top bar are semi-transparent, which adds nice visual presence. When a window touches either element the “dynamic transparency” feature kicks in to render both dock and top bar darker, making panel label contents more legible in the foreground.

Although no the default behaviour it is possible to enable auto-hide for the Ubuntu Dock. This makes the panel duck out of view when a maximized or free-roaming window obscures or comes into contact with it. To try it, head to Settings > Dock and slide the ‘Autohide‘ toggle on. 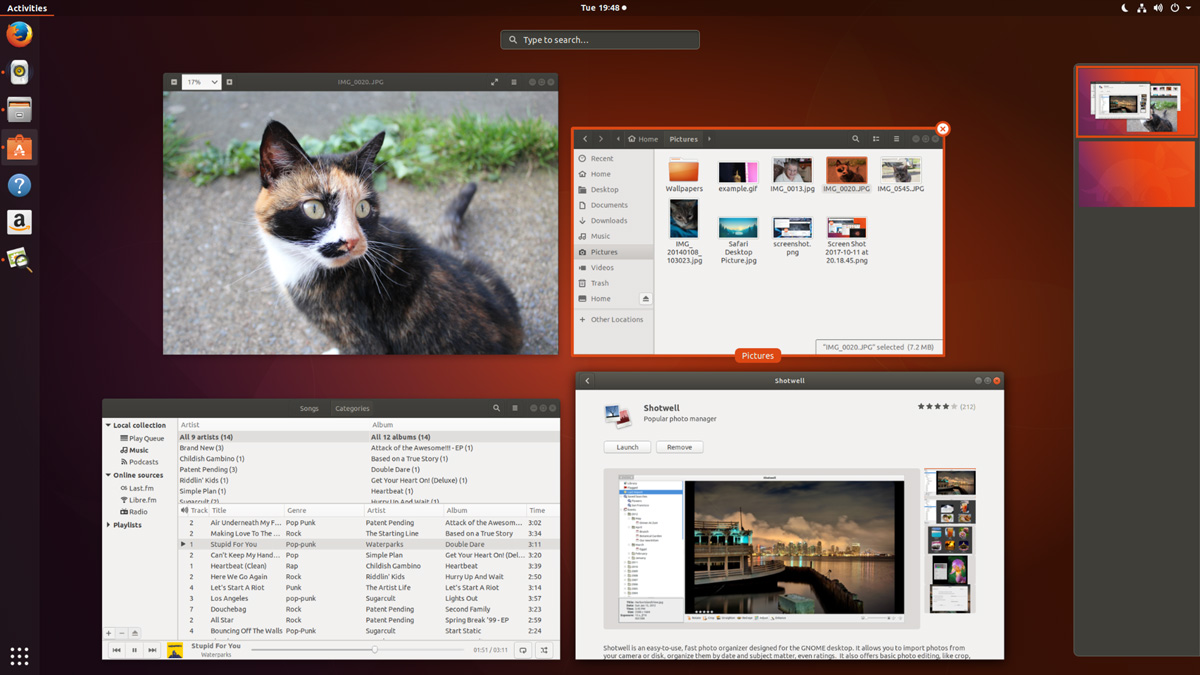 The main “desktop” area remains a usable space on which you can place icons, folders and files on (the regular version of GNOME Shell disables this functionality, leading some to worry Ubuntu would follow suit).

‘The main “desktop” area remains a usable space on which you can place icons, folders and files’

There’s no longer a true global app menu, but the majority of apps place a small menu in the top bar bearing the name of the app in focus. These app menus contain a solitary ‘quit’ button at the least, or a full compliment of options at most.

You can manage running applications using the Ubuntu Dock (see above) or by using the Activities screen.

Just tap the Super/Windows key (or click the ‘Activities’ label at the top of the Ubuntu Dock) to trigger this exposé like window spread. It will highlight open windows. Hover over a window to see the window title and reveal a quick close button, or click on a thumbnail to go to that app.

The Activities screen will display all running app windows, even minimized ones.

Workspaces are a common feature found on most modern desktop operating systems (including Windows 10) so I’m pleased to say Ubuntu hasn’t ditched them.

Click the ‘Activities’ label in the uppermost left-hand corner to enter the window management view. To the right you’ll see a dash space with two desktops on it. You can easily move windows between workspaces by clicking on a window and moving it on over the workspace you wish to place it. 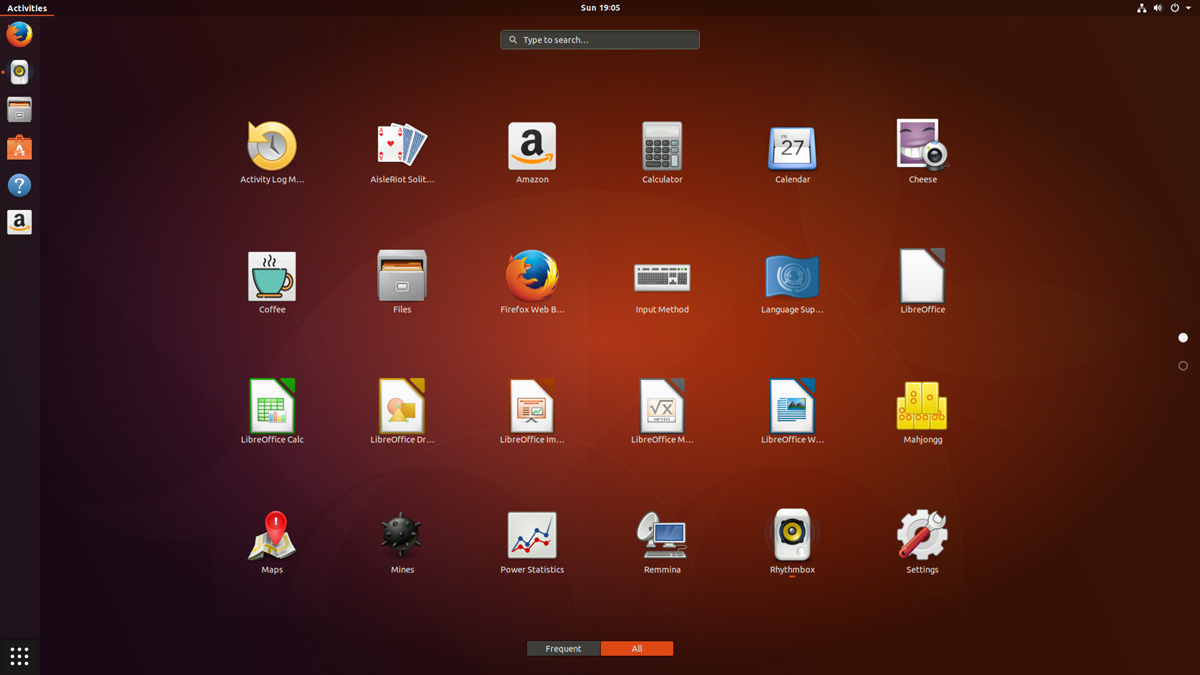 Click on the dotted-grid icon at the bottom of the Ubuntu Dock and the Applications screen will swarm in to view. You get to see more of your installed software at a glance than the truncated view offered in the Unity Dash.

You can launch an application by clicking on it, selecting it with your keyboard arrow keys and pressing enter, or by touching it (if you’re using a touchscreen).

A feature I particularly like (and keyboard fans in general will appreciate) is that you can start typing an application name to trigger the app search.

Sadly for my typo-prone digits this feature lacks “fuzzy” matching, so you do need to be precise!

You can also use the search box to quickly find Settings panels, apps which are available to install from the Software app, and more. You can choose which results show (or don’t show) from the Settings > Search panel.

At the bottom of the Applications screen is a two-button tab bar listing “Frequent” and “All”. These options do exactly what they state: ‘Frequent’ shows you your nth¹ most recently used apps, while ‘All’ shows you all the apps you have installed.

But, following feedback from OMG! Ubuntu! readers, you will notice that Ubuntu 17.10 moves window buttons to the right hand side of application windows. Don’t like it? You can undo it.

Client-side decorations — the fancy name given to apps whose title bar and toolbar are one and the same — are no longer “patched” out of apps like Nautilus and Calendar. This decision is welcome as it allows software to look and work as intended.

While using some apps you may notice that some buttons are coloured green. This isn’t a bug, but a (rather oddly) themed “suggested” action. 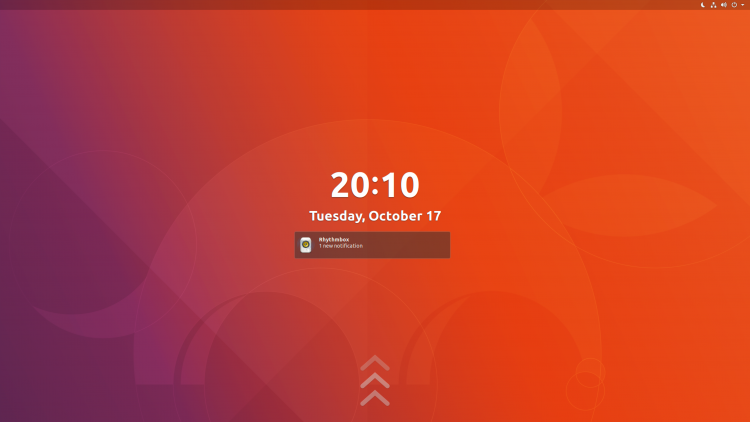 The GNOME Display Manager 3 (GDM3) takes over login and lock screen duties from LightDM and the Unity Greeter.

The lock screen especially takes a little getting used to as it requires you to press a key to reveal the input prompt.

But the fact it is able to display discreet notifications from apps you choose is a nice touch.

Wayland is the default display server 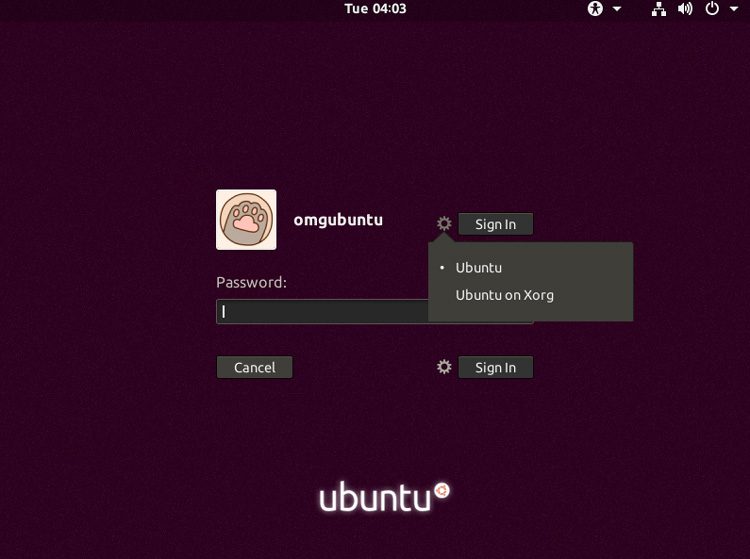 In another major change Ubuntu 17.10 uses Wayland as its default display server (where supported), both for new installs and upgrades.

Switching from the legacy Xorg display server to Wayland is a huge change, but chances are you won’t notice any major differences while using Wayland (which is a good thing, obviously).

Although the fledgling tech is maturing at a clip, as Canonical’s confidence to make it default attests you may encounter bugs, corner-cases, or other issues when Wayland on certain hardware; when trying to run older apps or play high-resolution games; or when you attach certain types of input devices or monitors.

But don’t panic if this happens: Ubuntu 17.10 still includes a X.org session by default.

To use Xorg instead of Wayland all you have to do it log out, click on the cog menu at the login screen, and select the “Ubuntu on Xorg” session. Then login as normal. 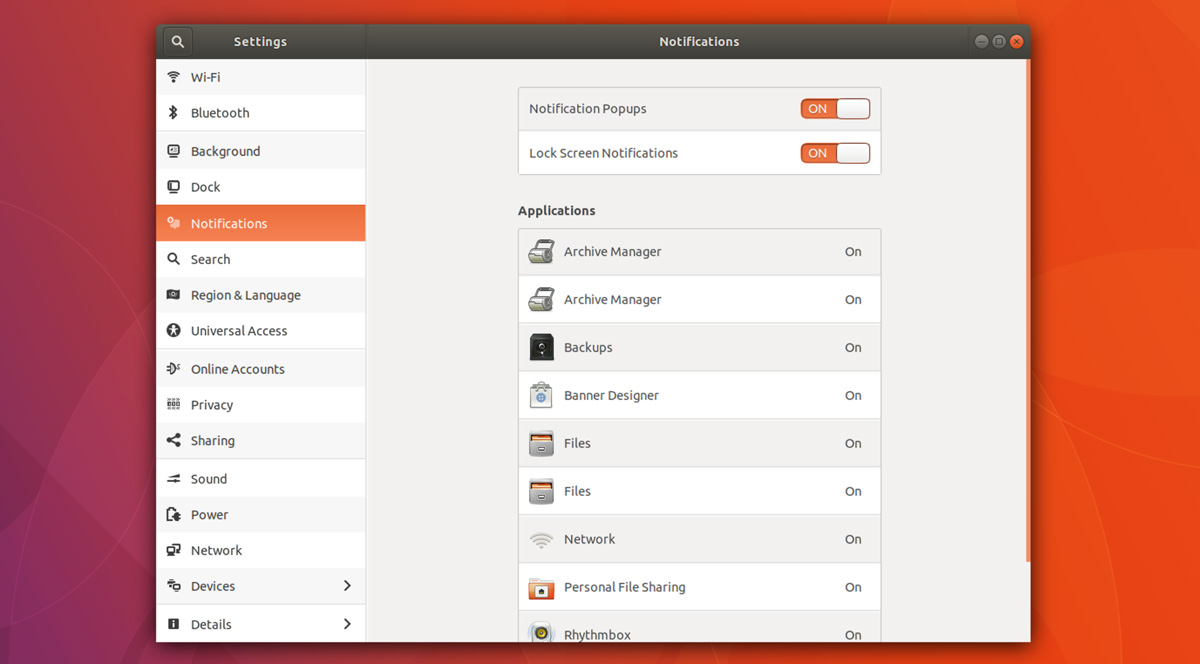 The old Ubuntu System Settings app was functional, of a little inconsistent, fork of the upstream GNOME Control Centre. Settings is a new version of the latter, which Ubuntu 17.10 includes.

A new, sidebar centric design, debuts in this release. Various setting panels contained within the app have also been retooled to follow similar layouts and patterns. 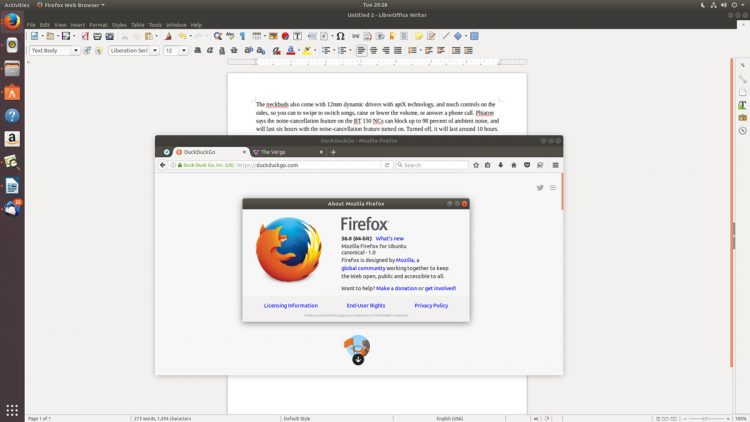 The introduction of GNOME Shell on the desktop is by far and away the most significant change in Ubuntu 17.10, but there a number of key app updates and other improvements are also worth a quick mention.

Ubuntu includes the latest versions of key apps, including Firefox 56 for browsing the web, Thunderbird for e-mail, and the latest LibreOffice.

The desktop Calendar app integrates nicely with the Message Tray, and the app itself now supports the creation and editing of recurring events.

If you use public Wi-Fi often you’ll appreciate efforts made to improve captive portal detection.

It is gone from the download image but you can install the Unity desktop on Ubuntu 17.10 if you miss it.

If you upgrade from an earlier release, like Ubuntu 17.04, Unity will stay installed, but you will need to select the Unity session from the login screen to use it.

As for what the Unity experience is like on 17.10, well, it’s mostly intact. But with moving sand underneath it’s feet it’s not exactly as it was in earlier releases.

For a more “vanilla” Unity experience you’ll want to install the no-csd package to restore traditional app menus, and you may need to fetch in the ubuntu-online-accounts package manually to restore online features in the Dash.

Ubuntu 17.10 desktop is only available to download as a 64-bit image (as most of you will know).

If you’re stuck on a 32-bit device you can upgrade from an earlier release (like Ubuntu 17.04 32-bit) but to perform a fresh install you’ll need to use the minimal or net install .iso and fetch the rest of the distro in manually.

This change does not affect Ubuntu flavours, so you could instead switch to a lighter spin like Ubuntu MATE.

The Aardvark Has Its ‘Ard Parts Too

Despite best efforts to make GNOME as Unity-like as possible there are of peculiar choices on show.

Managing workspace is far less intuitive than it was under Unity (though nothing a few keyboard shortcuts can’t correct) and the UI often feels a little sluggish to respond to clicks (though this is more of a perceptual issue because of the slow GNOME animations).

The Amazon app that no-one asked for still comes pre-installed and pre-pinned to the desktop launcher, On the positive side it does load in the default browser rather than a shonky window frame.

Want to grab a Ubuntu 17.10 download? Just hit the button below to fetch the latest ISO image direct from the Ubuntu servers.

You can use an image writing tool like Etcher to burn it to a USB stick , and then boot and install it on your computer.

If you’d rather give a little back as you download you can also download the Ubuntu 17.10 torrent. 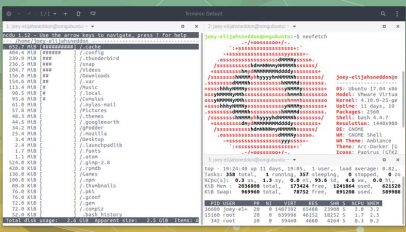