Ubuntu needs a better default image viewer and in this post I explain why.

Ubuntu’s default image viewer is ‘Eye of GNOME‘ (often referred to by the package name of ‘eog‘). It does its job well enough: it lets you view images stored on your computer with a few clicks.

But therein lies the rub; eog can’t do much more than that. The app is no where near as featured as the default image viewers on other platforms, including Android and even Chrome OS!

It’s for this reason that I made changing image viewer a step in my list of things to do after installing Ubuntu 19.10.

What Ubuntu’s Image Viewer Can’t Do

Admittedly, it’s been a long time since I last dove in to the world of open source image viewers (props for anyone who remembers Viewnior, an app I blogged endlessly about circa 2010. Here’s hoping it gets a GTK3 port one day).

Yet after every Ubuntu install I still do the exact same thing: make Shotwell the default image viewer for all supported image formats, including .jpeg and .png. Shotwell (when used as an image viewer) has a tonne of features that I use often, and it puts them in an accessible place.

Features on other platforms

The default image viewing apps on both Windows and macOS lets users do more with an image than simply see it. They provide options to resize and crop, add text and callouts, and even perform basic image enhancement.

It’s reasonable to assume that folks switching to Linux from one of these aforementioned systems might expect to find a comparable set of features in their chosen distro’s native image viewer.

If Ubuntu users would appreciate having some of those capabilities in easy reach too, and since Shotwell provides them, ought it be default instead?

GNOME developers will, one imagines, reason that, as an image viewer EOG should focus solely on viewing images and leave image editing to image editors, organisation to photo managers, and so on.

But while that explanation is reasonable I feel it overlooks the core reality of why most people use an image viewer today.

And spoiler: it isn’t just to gawp at photos!

Thanks to smartphones, social networks, and ephemeral messaging services we send and receive more images than ever before. From gifs and selfies, to screenshots and wallpapers.

And, like many, I tend to view an image as the first step in a longer chain, usually to check that txhe photo in question is the one I’m looking to share or send or post or whatever else I want to do with it.

As part of that flow I usually make some basic edits, like cropping and resizing /converting the image to a lossy format.

Shotwell caters to all of that, within the same app, and in the same window. I don’t need to load my image in an external app to make edits (then save the image, then open the image in the imagine viewer again to check it’s the edited copy).

On screen controls are handy

Having essential editing features available in an image viewer saves me time. Do they need to be on screen all the time (like they are in Shotwell)? Probably not.

Which brings me back to eog.

Now, I’m not advocating that eog transition to a full-fledged photo management app, but I do think that some thought should be given towards modern expectations and needs.

For instance, when I open an image eog I get four on-screen button: prev/next image and rotate left/rotate right:

Unless there’s been a sudden uptick in the sale of digital cameras from the 1990s, why does rotating deserve omnipresent controls on every image?

I rarely need to rotate an image, certainly no where near enough to need on-screen controls plastered over every photo I view.

That said, Shotwell isn’t flawless. It certainly has a few areas where it’s lacking, as this chart shows:

Then there’s platform integration. Eye of GNOME might be frills-free but it looks like a modern GTK3 app thanks to its header bar. Shotwell is clinging to its old-style app menu. This makes the app look rather out of place on the modern Linux desktop.

We all use images way more than we used to. Ubuntu should ship with a modern image viewer, like Shotwell, to anticipate and cater to those needs. 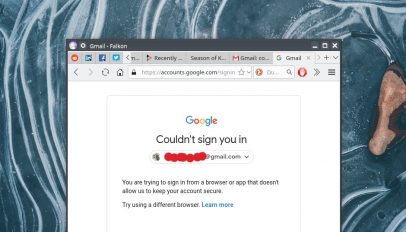