Let’s rewind the clock and transport our collective minds back to the year 2008.

Back then a dual-core processor was something of a luxury, 1GB RAM was standard, and you were only ever a mere reboot away from seeing the most dreaded of Linux errors: “The system is running in low graphics mode”.

Simpler times perhaps, back when app windows wobbled, wi-fi rarely worked, and the tribal boot-up sound of Ubuntu would blast out of your tinny speakers at the most inappropriate times!

Why am I talking about the past?

Well, part of my daily writing ritual is to look back into the omg! archives to see what I was blogging about on this day {x} years ago.

Sometimes when I do this, and I come across something notable (or something that makes me a little misty eyed through nostalgia) I tweet about with a #OTD (On this day) hashtag.

One of our Twitter followers replied to an #OTD a tweet recent, reminiscing about his own old school set-up of yore.

And that tweet led me to think about all the other apps and utilities that al of us used to consider central to our Linux experience, but which we now no longer use — progress, tsk!

I figured I’d tap sine if those thoughts out into this post, because I reckon a few of the names that follow will bring back a memory or two for some of you too!

5 Linux Apps We All Forgot

GRUB is an intrinsic part of the Linux boot process and has always, quite rightly, favoured function over form. Most of us familiar with its boring black background and monospace font of the stock GRUB loading screen.

It is (and indeed always has been) possible to theme GRUB but it’s not the easiest (or risk-free) of tasks. In fact, it takes more effort than the blink-and-you’ll-miss-it results are generally worth.

BURG is based on GRUB but offers greater graphical prowess. Or, to be more plain about it, it made boot-loader screens look sexy!.

Remember that, around this time, many of us were still regularly dual-booting, not only with Windows and/or Mac OS X, but also with various other Linux distributions, development releases, and so on. This was the pre-“use a VM for everything” era.

We covered BURG and BURG themes a fair bit back in the day. Our last specific post on it was in mid 2011.

My main memory of it was a) how great it could be made to look and b) how easy it was to use. There was no manual editing of files needed (if you didn’t want to) and themes could be added, switched and tweaked through a desktop app.

Surprisingly BURG is still going, at least going by activity in its official PPA, which includes supports Ubuntu 16.04 LTS. Sadly I can’t quite pluck up enough courage to try it out myself, but if you’re still rocking a graphically impressive boot-loader using it, pics or it didn’t happen! ;)

Avant Window Navigator is known to most as AWN and was/is — it’s hard to pick a tense in this post — a blingy desktop dock application for Linux.

Back when Ubuntu shipped with GNOME 2, AWN was on every other desktop screenshot you’d see in the Ubuntu Forum’s “desktop screenshot thread” (as well as in our short-lived/quickly forgotten OMG! Flickr group).

I never liked AWN as much as its biggest rival, GNOME Do’s Docky mode. But, before Docky, I did use it, and, for while it was the desktop Linux desktop dock.

Aside from being somewhere to launch apps and manage open windows, the AWN dock was incredibly customisable. You could change the theme, the style, the animations, each individual app icon, and a whole heap more.

It had a some impressive ‘modes’, from standard of-the-day 3D dock with pirouetting mouse-over effects, to screen-spanning Windows-wannabe panel mode, and (initially a fork, later absorbed into the app) the popular “lucido” mode.

The app seems to be somewhat alive. There’s a AWN Github repo, but the last commit was back in 2015.

Microsoft’s Windows Vista had its desktop gadgets, Apple’s OS X had its Dashboard widgets, and Linux had Screenlets.

Screenlets were little, floating single purpose applets written in Python, or web technologies that sat on the desktop. They were designed to be used with a compositing window manager (i.e. Compiz, mainly).

A crop of widgets were included with the app out of the box, including a weather applet and clock, RSS reader and picture frame.

Additional Screenlets could be downloaded from the web and loaded in to the app.

One of the earliest posts made on this site was about screenlets.

The screenshot of my desktop from April 2009, above, is plastered with screenlets. They sit on a (then awesome, now cringe) wallpaper I designed solely for these wibbly little desktop widgets.

Screenlets was recently revived, and made its first release in nearly 5 years earlier this month!

‘Emerald themes could be classy, mute, minimal …but rarely were!’

Emerald themes could be classy, mute, minimal …but most were like the one you can see above, all gloss, transparency and gleam!

I remember being really taken with the ‘Outsiders’ Emerald theme’ that made window controls appear as though they were floating outside of the main app window and not embedded within it. Practical it wasn’t,  but it sure did look good!

My biggest memory of Emerald is how freaking often it’d crash or screw up and leave me with borderless windows stuck around my desktop!

Emerald is no longer available in the Ubuntu archives. It may be possible to find it in a third-party repository but you should be aware that the window decoration plugin will conflict with Unity on Compiz-based desktops.

Usplash was Ubuntu’s go-to user-space application for drawing splash screen during boot times. Around the era of the Karmic Koala it was replaced by a more capable tool called Xsplash.

Now, again, you have to appreciate that most of us were used to seeing nothing but garbled terminal commands haemorrhaging over our screens in the bit after GRUB, but before X had kicked in. And even if you did see a pretty boot-splash there’s a good chance it would flicker on every frame of its loading animation!

Which is probably why system tweakers and designers loved Xsplash. Firstly it just dang well worked more reliably because it used the X server instead of the Linux Framebuffer , but it was very easy to customise. You could better resolution backgrounds, add custom gif animations, and the like.

A few really neat desktop apps and script sprung up around Xsplash too, including a script that changed the xsplash background to match your desktop wallpaper, helping to create the illusion of a seamless boot, from BURG to desktop.

XSplash was replaced by the far more capable Plymouth, “an application that runs very early in the boot process (even before the root filesystem is mounted!) [to provide] a graphical boot animation while the boot process happens in the background.”

Let us know your memories of using the apps above (and whether you still do) in the comments below. Feel free to chime in with other apps we all once raved about but have long since forgotten… 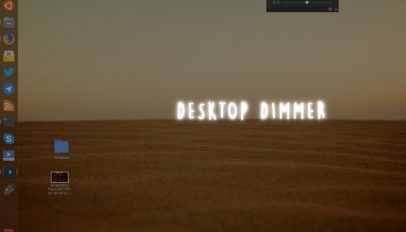