Want to tidy your Linux desktop in a single click? Well, with the nifty panel applet we’re spotlighting today you can do exactly that!

Some of us treat the desktop as a sacred space, somewhere to be kept immaculately tidy, and house only the most essential of application and file system icons.

Some see the desktop as a kitchen work top; as a space on which to temporarily place files, images, videos, links, and other fluff as  they work.

Yet others treat the desktop as just another folder and cram, litter and fudge it full of everything and anything they can!

Now, I’m not a hoarder; I only mean for the items I put on my desktop to be there temporarily. But I can admit that I often forget to clean up.

Eventually, my messy desktop gets too cluttered and crowded with files, shortcuts and folders, so I have to manually clean up. Until recently I did this by selecting every single file on my desktop and moving it in to a new folder called ‘cruft’.

Which is where Clear Desktop comes in. If you’re wondering how to clean up icons on the desktop, be it the Ubuntu Unity desktop, MATE, GNOME or Cinnamon, this indicator will help.

Clear Desktop is a nifty indicator applet for the Linux desktop that lets you quickly, easily, clean up desktop icons with a single click.

The tool is is ideal if you want to:

When run, “files from desktop will be moved to special directory in ~/Home, so nothing is deleted”, the applet’s developer told me via email. “You can open this folder from the indicator as well. I’ve tested the indicator on Unity, Cinnamon, Zorin. I created it for RouchOS but I want to share it to others.”

This folder organises your cleanups based on time and date, which may help you find things a little faster.

Simple stuff, right? The one-click action means it should be easy to keep your desktop clean and tidy going forward. Anytime you notice too much cruft, just open the indicator and hit the clear desktop button.

Clear Desktop is nifty (for those of us too lazy to clean manually). It would be great to see it evolve further and automated functionality, e.g., “move .jpg to ~/Pictures“, “move.gif to ~/Pictures/memes“, “move .mp3 to ~/Music“, etc.

Clear Desktop is available to download from Google Drive using the link below.

Bonus points for anyone who remembers DayFolder, an Ubuntu app form 2012 that did a similar job to this one.

Top image via ‘Show Your Desktop‘ 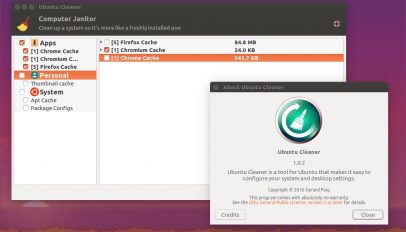