The Ubuntu Touch interface has been praised by many over these last few months – and it’s been more than justified.

But despite being designed around the same motifs and elements the Phone and Tablet look is slicker than its desktop counterpart.

With the recent announcement of Unity Next, the gulf between mobile and desktop Unity will lessen and the convergence among interfaces more seamless.

Don’t want to wait? Neither does DeviantArt user ~Aerilius.

Aiming to bridge the design divide now, Aerilius has created a set of replacement launcher assets (tile shapes, etc) to bring some of the phone’s swish stylings to the stale look of the desktop.

Ailirus is no stranger to Ubuntu theme work, having previously an Ambiance theme for WINE applications.

As Unity doesn’t have native theming capabilities installing the pack is a bit of a faff, and does need you to overwrite some core system files.

If you delete something you shouldn’t Unity will refuse to launch – so be careful if you intend to use it!

First things first: grab the .zip archive containing everything you need from the following link:

Once the archive has fully downloaded right-click on it and choose ‘extract here’.

Open a new Terminal window and enter the following command, inputting your root password where prompted:

With backup made double-click on the folder named ‘6’ and move its windows to one side of the screen.

Now open the extracted folder from earlier, also called ‘6’, and move it to the opposite side of the screen. Select all (Ctrl+A) items inside it and drag them over into the other ‘6’ folder.

Changes are not instant, so you need to log out and back in before the new launcher assets take effect.

To reverse the changes run:

Then move your backed-up copy of the original folder and its contents into the Unity folder. 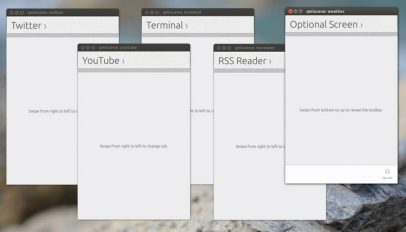 [How To] Install Ubuntu Touch Core Apps in Ubuntu 12.10
Read Next