Although the attention is  on Ubuntu’s newly-revealed web app desktop integration malarky right now, there are other alternatives available for those looking to   marry the best of the web with their desktops.

Fogger is one such example.

We’ve written about Fogger before. Created for the Ubuntu App Showdown, Fogger is a GTK-Webkit site-specific browser (SSB) with native support for userscripts and userstyles that can modify the look and behaviour of web apps, integrating them into the Unity desktop.

These configurations can be ‘bundled’ up into distributable ‘Fogger Apps’.

If you’re a regular reader then you will remember that a pre-packaged ‘Facebook’ fogger app was released around a few weeks ago.

The Wunderlist Fogger app uses a userstyle to better integrate the look of the app into the Ubuntu desktop. The upside to this is a native looking app, the downside is losing Wunderlist’s ‘unique’ look. 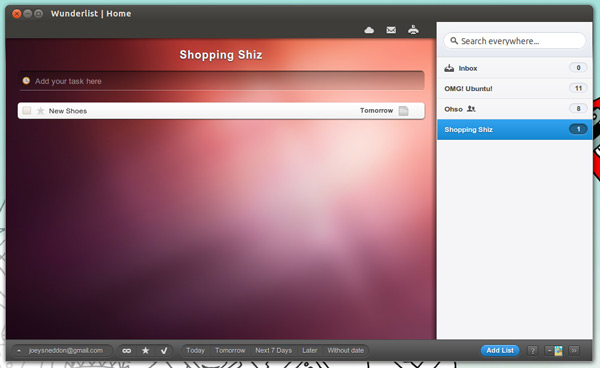 Wunderlist for Fogger also brings a well stocked quicklist to its Unity item. 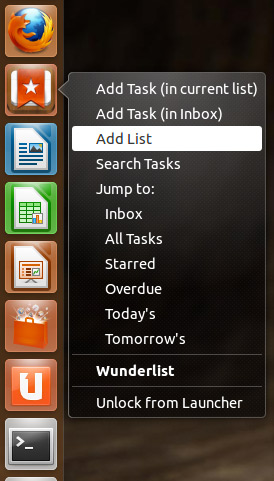 This isn’t Wunderlist’s first appearance on the Linux desktop. It was previously available to install through the Ubuntu Software Center.

Since then incompatibility issues have scuppered successive releases of the app on Ubuntu. Wunderkinder have told me that despite this they haven’t crossed Ubuntu support off of their to-do list just yet.

So in the mean time Wunderlist for Fogger is the perfect fill in replacement. It frog-leaps over many of the native client’s issues, giving you a stress free way to use the popular service right from Ubuntu.

To use Wunderlist for Fogger you will need to add and install from the following PPAs.

Adding third party PPAs isn’t usually recommended, and with Fogger to be made available in the Ubuntu Software Center at some point in the coming week or so, you may want to hold off on installing.

If not, here are the commands you need:

Once installed launch Wunderlist using the Unity Dash. Note: to use the Wunderlist web-app you will need to sign in using (or create) a Wunderlist or Facebook account.

Learn About Your Medication With the Unity Medicines Lens
Read Next