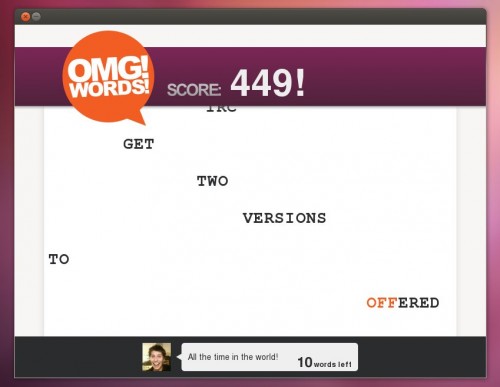 Our OMG! Ubuntu! themed typing game OMG! Words! has been updated with support for Ubuntu 11.10 and, ahead of its release this April, Ubuntu 12.04.

Other than that there is nothing new: it still offers the same increasingly-frustrating game-play, cool soundtrack, and handful of annoying twists to make it a bit more challenging.

All of the words that appear in the game are pulled in from actual posts here on the site – so no two games will be the same, and the selection of words presented to you ever changing based on whatever we’re writing about.

The aim of the game is simple: correctly type each of the words that appears on screen before it reaches the bottom. Things go at a steady pace to begin with but the pressure soon ramps up!

Drop too many words and Benjamin will begin hurling insults at you. Drop more than 10 and it’s game over.

Be sure to keep an eye out for an errant Benjamin* as he zips across the screen – any word his head touches will be scrambled. But fear not, if my own mug flys by and touches a scrambled word it will return to normal.

Here’s a user review of the game in action, but do note before watching that it doesn’t include the game soundtrack.

How to install OMG! Words! in Ubuntu

Once installed you can launch it by shouting ‘OMG’ into the Dash search bar: –

The game is also available for Ubuntu 9.10, 10.04 and 10.10 but also requires the Love stable PPA to be added to your Software Sources prior to installation.