Psensor is a slick little utility for monitoring hardware temperature in Linux.

My graphics card fan is bust.

Well, I say bust but what I actually mean is that I disconnected the fan because it was so freaking loud! I do intend to buy a replacement cooler for it shortly, but in the mean time Psensor allows me to keep an eye on its temperature over a given period with the data recorded and presented in graph form for easy digestion.

Better yet it can provide notification alerts when hardware reaches a set temperature. 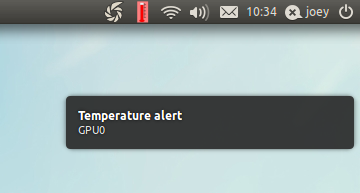 But its not just useful for monitoring noisy graphics cards either. Psensor can monitor the temperature of your…

Add ‘ppa:jfi/ppa’ to your Software Sources, update and then search for and install ‘psensor’ from the Ubuntu Software Centre.

The usual caveats apply when downloading and install .deb files from third party sites or non-Canonical PPAs – i.e. you do so at your own risk.