A new default GTK and Metacity* theme for Gnome 3 landed in the Gnome Shell git a few days back. Called Adwaita it looks very similar to the design mock-ups displayed at GUADEC earlier this year. 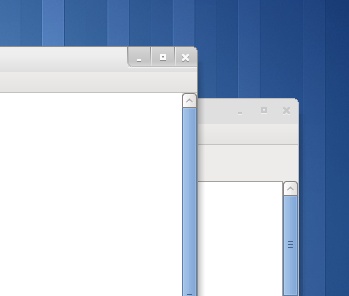 The design – which is still a work in progress I hasten to add – adds a modern, light and clean feel to the Gnome 3 desktop.

Also relatively new are changes to the Mutter compositing environment – and these I cannot speak highly enough of .

The default stock set of visual effects that are enabled in Gnome-Shell (currently, who knows may change) are utterly well chosen. You might think that the lack of ‘flashy bling-bling’ would be a detriment but, if I’m honest, it’s actually a boon: with no gaudy or superfluous effect choices to choose from Gnome-Shell behaves elegantly.

Moving open application windows feels incredibly tactile with a fluid kind of friction.  The Shell overlay, workspace switching/moving/adding  and window spawning effects are all subtle, understated but well transitioned,  and all perform flawlessly; like a hot knife through some vegan soya-spread. 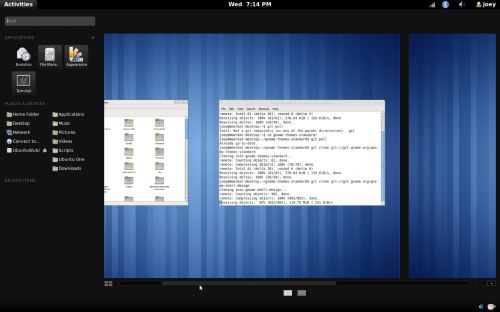 Another recent change in Mutter which adds significantly to the overall ‘feeling’ of visual cohesion is the introduction of ‘modal dialogues/sheets’ – think OS X ‘enveloping’ pop-ups – which, as with almost every other effect that was enabled by default, not only looked beautiful but really made a difference to usability. Kiss goodbye to losing dialogue boxes behind windows!

Below is an example of the ‘sheets’ in action in Google Chrome: a file browsing dialogue – which would normally have it’s own window controls – is instead ‘pinned’ to the browser itself. 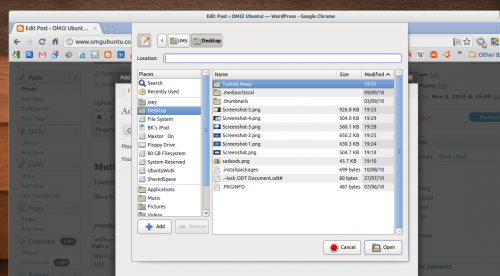 Totally off topic but still very nice to look at is the run dialog display/ALT+F2 which is now all HUD-esque.

GNOME-Shell will be available to install in Ubuntu 11.04. Development packages are also available for use in Ubuntu 10.10.