You can never have too much of a good thing, right?

That is unless it comes to Linux music players where a new one is seemingly spawned at the stroke of midnight every night.

Although competition and innovation are requisite bedfellows there comes a time when ‘yet-another’ app of the same ilk is nothing more than a damp log thrown on to an well-stacked fire.

‘Pogo’ is the latest weight to sit upon the buckling shelf of native Linux music players.

The official blurb says Pogo is “probably the simplest and fastest audio player for Linux.”

The uncertainty in that claim is actually rather refreshing. I’m bored of apps claiming to be ‘lightweight’, ‘trimmed down’, ‘paired back’ only to find that they are barely functional proponents of archaic user-interfaces with not enough point to justify asking ‘what’s the… ‘

Whilst all applications should strive to be resourceful I am not otherwise averse  to my computer being, y’know, used.

Back to Pogo and the interface is a stripped back two-paned affair: a directory tree for locating music hangs on the left and a blank playlist on the right. Above those a toolbar with some basic control buttons sits. 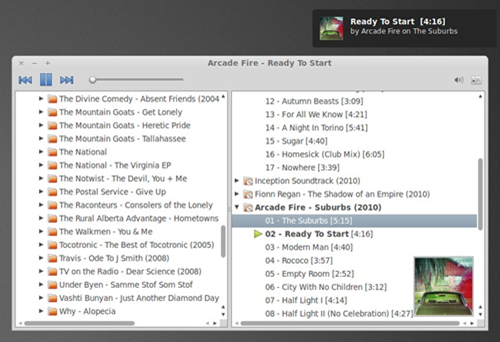 it’s not going to win first prize in the feature-filled app award, although the playlist is notable for grouping albums and cover-art  is automatically fetched. Desktop notifications and an equalizer round out the rest of the set.

“Are you ready to pogo?” asks the official blurb. It’s worth a punt  if you’re specifically looking for something in the vein of ‘less is more’ but does it have enough spring in its step to rise above the soup of similar apps (DeaDBeef, Decibel, Xnoise, Minitunes, etc)?

That’s for you to decide.

The latest .deb release for Pogo can be downloaded @ launchpad.net/pogo