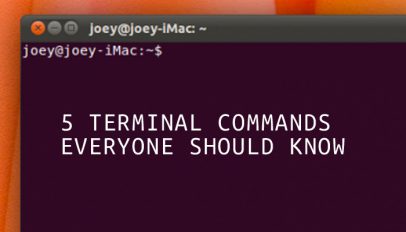 Five Terminal Commands Everyone Should Know (as chosen by you)

Reader Raiyan mailed in with an idea for an article a few weeks back, titled 'Top five commands a new-comer to Linux should know.' A great idea, but we all have different ideas about what makes a must-know command. So I took to the @omgubuntu twitter account to ask you - the readers - what five commands would be in your top five. After the jump are the five most suggested commands by you - the OMG! Ubuntu! reader.

VTerminal is a lightweight pop-up terminal

Long for a pop-up Terminal to appear at the push of a button? Well, you got it with VTerminal.

[How to] Quickly Google Command Line Errors From The Terminal

How many times have you needed to Google an error the Terminal has spat out at you? For me it’s lots. ‘Search on Google’ is a small Terminal hack that lets you Google Terminal errors quickly […]

If you're an avid terminal user and ever wondered what commands you use most often then read on to find out how to see your top ten most entered entries!

I spotted sight of the following application over on the very ace  Cewen’s blog and found it so nerdily cool (and also seemingly useful) that I haven’t been able to resist posting about it. As […]