I spotted sight of the following application over on the very ace  Cewen’s blog and found it so nerdily cool (and also seemingly useful) that I haven’t been able to resist posting about it. As such do forgive the irrelevance and/or potential WTF-ing at the following marriage of GUI and CLI…

Have you longed for an integrated Terminal in Nautilus? Hate being torn between flexing your terminal talents and resizing some holiday snaps in Nautilus? 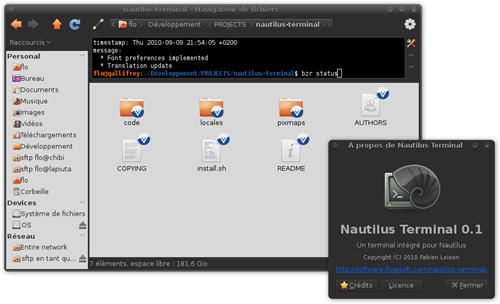 The idea behind Nautilus-terminal is actually rather simple  – so much so that I’m somewhat surprised no-one has thought of it sooner! The merge inserts a full-blown, fully-working terminal just below the main navigation bar in the Nautilus window, comes with many, many preference options (such as configuring the look, height or font) and supports a neat separation mode with the F3 key creating a new tab.

So who’s the Frankenstein behind the monster? Fabien Loison – better known to many Linux users as ‘Flozz’ or ‘the creator of cover-thumbnailer’.

The PPA contains nautilus-terminal builds for Ubuntu 9.10 through to Ubuntu 10.10 testers.

Open a terminal (heh) and enter the following commands

Now restart nautilus by pressing ALT+F2 and entering  ‘nautilus -q’ sans quote marks or logging out and back in.