As the first point release issued since the release of Zorin OS 16 back in august of last year Zorin OS 16.1 is “packed with improvements to help users work better, updates to apps and system-level software, and support for new hardware.”

Chief among the updates is LibreOffice 7.3. This is the latest version of the popular open source office suite and it boasts improved compatibility with and faster opening of Microsoft Office files, a better dark mode, and a slate of smaller tweaks aimed at improving functionality and performance.

A swathe of other apps preinstalled in Zorin OS 16.1 have been updated to their latest versions, with the am to reduce the number of software updates required after a new install.

Among the changes this kernel offers is better EXT4 support, a new cooling driver for modern Intel CPUs, an uplift in NVIDIA graphics capabilities, of-the-box compatibility with the Framework laptop, and support for a plethora of peripherals including the Apple Magic Mouse 2, Sony PlayStation 5 DualSense controller, and the GK6X mechanical keyboard.

If you currently run Zorin OS 16 you don’t need to reinstall as you can upgrade to Zorin OS 16.1 by installing all pending updates from the Software Updater utility.

Don’t use Zorin OS but want to try it? You can download Zorin OS 16.1 from the Zorin OS website. It’s available in two edition: free, and pro. Zorin OS 16.1 Pro costs from £39 and ships with more apps preinstalled, unlocks more desktop layouts, and helps to support the development of the system.

Between March 10 and March 17 Zorin plans to donate all profits from sales of Zorin OS Pro to humanitarian aid causes helping the people of Ukraine. Profits will be split equally between The Red Cross, Doctors Without Borders, and Tabletochki. 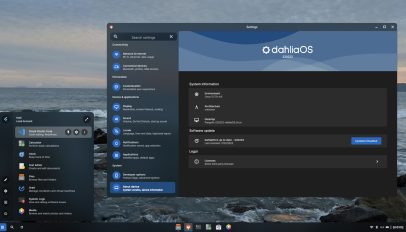 Hands On With the Latest Version of DahliaOS
Read Next