This is latest long-term support (LTS) release of Linux Mint and the release is supported until 2025 with critical security and core app updates. Linux Mint 20.1 (codenamed “Ulyssa”) is based on Ubuntu 20.04.1 LTS and builds out from June’s Linux Mint 20 release (which made our list of the best Linux distro releases in 2020).

You can download new .iso images from the Linux Mint website and mirror servers. And if you don’t want to do a fresh install, you don’t have to: you can upgrade Linux Mint 20 to Linux Mint 20.1 using the built-in software update tool.

Linux Mint 20.1 has several new features and makes a couple of important changes, all aimed at refining the user experience and enhancing the system’s capabilities.

Under the hood the Linux Mint 20.1 kernel version is Linux 5.4, with Linux firmware 1.187. New installs use a unified filesystem layout that merges “…all files from the directories in / […] into their respective counterparts in /usr”. Most users, however, won’t notice a difference from this.

Cinnamon 4.8 sits at the heart of Linux Mint 20.1 (though, as always, editions with other desktops are also available). The latest version of the Cinnamon desktop environment is faster, use less memory, and is said to be ‘better optimised for 4K’ set ups.

Mint’s Nemo file manager now supports marking files as ‘favourites’. You can mark a file anywhere on your system, including removable devices by right-clicking on it and selecting the “Add to Favorites” (sic) option present in the context menu.

You can access favourited files at any time from pretty much every anywhere!

Favourites support has been added throughout the Cinnamon desktop. You can access fave files in file-picker dialogs, from the ‘Favourites‘ section in the sidebar of Nemo and the application launcher, and also from the new “Star” applet present on the bottom panel.

Finally, and of particular note to fans of the open-source Chromium web browser, Linux Mint now maintain a Chromium package in its repo, negating the need to rely on Ubuntu’s Snap package system.

Linux Mint 20.1 comes with a new app to ‘turn any website into a desktop application’. The Web Apps manager is preinstalled and can be used to create web app to any site reachable through a regular web browser.

Web apps even use their own window frame and have their own app icon, with Mint devs saying: “it’s easier to multi-task between applications on the desktop than it is between tabs in a web browser.”

Hypnotix is the other new app in Linux Mint 20.1. It is an IPTV player for M3U playlists, but also supports live TV (region dependant) and video on demand (IPTV dependant).

Mint devs bundle free IPTV provider Free-IPTV with the app by default. This makes “freely and publicly available live TV channels” available to Mint users out of the box.

Both of the new apps are open-source meaning users of other Linux distros (including Ubuntu) can use them too.

You can download Linux Mint 20.1 as a 64-bit .iso image using the link below (other official mirrors are also available to share the load if downloads seem slow).

Mint has made an additional ‘edge’ install image available to download. This image uses the Linux 5.8 kernel and is said to help users attempting to run this update on AMD Ryzen 5 and Ryzen 7 processors.

Once downloaded just flash the Linux Mint ISO to a USB stick using a tool like Etcher then use the stick to boot your system.

In summary, Linux Mint 20.1 serves as a fresh reminder of what makes this Linux distro is so popular. This is a powerful, well-featured, and dead-simple Linux distribution as well-suited to new users as it is to long-time open source advocates.

For a “just works” Linux solution, Linux Mint is the flavour to pick. 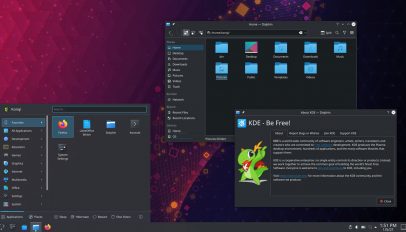