The Linux Kernel 5.8 release has been announced Linus Torvalds, but what’s new and improved? In this post we recap the various new features and core changes.

In his email announcement to the Linux Kernel Mailing List (LKML) Linus describes the release as thus: “So [here] it is, a shiny new kernel. Give it a whirl before all you people start sending me the pull requests for the merge window, which I’ll start handling tomorrow.”

Linux 5.8 is already available for testing in Ubuntu 20.10 daily builds. While it’s not yet clear which Linux kernel version the final stable release of the Groovy Gorilla will ship with come October (and thus get back-ported to Ubuntu 20.04 LTS via 20.04.2 LTS) there’s a good chance it will be this release.

If you were expecting Linux 5.8 to be one of the ‘biggest kernel releases’ in a long time you had good reason Linus hyped things up as such when the merge window for this release opened. Sadly you will need to put some brakes on your expectations.

Linux 5.8 is a pretty standard release. Not too big. Not too small. Just kinda there, doing everything the last kernel did (okay, and a bit more) better.

Still, there are some new features and key changes worth knowing about, including:

There is also also a swathe of miscellaneous file system, system architecture, memory, and performance improvements on offer. The kind of invisible meta-glue magic that holds your system together — now even better™.

A crop of ARM-based single-board computer and reference platforms gain support in this release, including the ODroid-C4, Mediatek MT8173 (used in various ARM-based Chromebooks), and the Renesas RZ/G1H.

For a more detailed look at this release in all of its binary glory keep an eye fixed on KernelNewbies.org for a comprehensive overview of all the core changes.

But, and this is important: you shouldn’t do that.

If you really can’t wait for Ubuntu to backport it you can go ahead and install it manually — just do so knowing that when/if your system breaks in half, you get to keep both pieces! 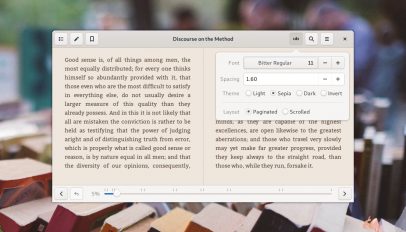 Why Foliate is the Best eBook Reader for Linux
Read Next