GNOME MPV — a GTK UI for my favourite Linux video player tool — has been given a brand new name.

The versatile open-source video app is switching away from the ‘GNOME MPV’ moniker to ‘Celluloid’.

Why? Because ‘GNOME MPV’ is a little un-descriptive, as GNOME dev Tobias Bernard explains:

“The current name is a bit unelegant, and doesn’t really fit in with other apps on the GNOME platform. Good app names are usually a single noun that’s related to the app’s domain (e.g. “Fragments” for a torrent app, or “Peek” for a screen recorder).”

Valid reasoning — but why ‘Celluloid’?

Celluloid is the new name for GNOME MPV

Celluloid is the name of a “transparent flammable plastic made in sheets from camphor and nitrocellulose, formerly used for cinematographic film” i.e. movies — perfect choice for a movie player, no?

There also isn’t a lot (if any) similar software using the name, either. Similar names can create all sort of problems, ranging from packaging conflicts to promotional crossed-wires.

Naturally there is, of course, a new icon to represent the newly-renamed app on users’ desktops.

The Celluloid icon is modelled after a frame of celluloid film and has a generic play icon and seekbar overlaid to denote that it’s a player.

You’ll also see that the glyph is wrapped in a gradient. Gradients are recommended by the HIG for GNOME’s new icon set for apps and utilities that handle or play media content (as such Totem video player has a gradient, too).

When will the new name premiere?

It’s likely that the first release of ‘Celluloid’ will coincide with/happen around the GNOME 3.32 release in March. For now the latest release (v0.15) of the app still uses the ‘GNOME MPV’ name and icon.

If you want to try GNOME MPV/Celluloid out you can grab the source from Github, or fetch it from Flathub. Both offer the latest

If you want the very latest version instead you will first need to add the GNOME MPV PPA. This PPA supports Ubuntu 18.04 LTS or 18.10.

Do you use this app? Are you a fan of the new name? Let us know!
Dev News gnome-mpv Icons mpv

Home » Dev » ‘Celluloid’ is the new name of GNOME MPV 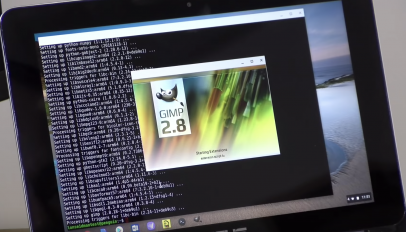