Mark Shuttleworth has revealed more about what’s next for the Ubuntu desktop.

His comments follow last week’s bombshell announcement that Canonical is to stop developing Unity 8, convergence, Ubuntu Phones and tablets, and that Ubuntu 18.04 LTS will use GNOME instead of Unity as its default desktop.

Speaking on his personal Google+ account the Ubuntu founder first thanks Ubuntu fans for their “spirit and intellect and energy in the Unity 8 adventure”, and adds that “the beauty of free software is that projects are bigger than people or companies.”

“Finally, I should celebrate that Ubuntu consists of so many overlapping visions of personal computing, that we have the ability to move quickly to support the Ubuntu GNOME community with all the resources of Canonical to focus on stability, upgrades, integration and experience. That’s only possible because of the diversity of shells in the Ubuntu family, and I am proud of all of our work across that full range.”

What’s Next for Ubuntu?

If you’ve been wondering it that means we can expect a vanilla GNOME-Shell experience in Ubuntu 18.04 LTS… Based on current plans, it seems almost certain that it does, with Ubuntu’s founder saying:

“We’re helping the Ubuntu GNOME team, not creating something different or competitive with that effort. While I am passionate about the design ideas in Unity, and hope GNOME may be more open to them now, I think we should respect the GNOME design leadership by delivering GNOME the way GNOME wants it delivered.”

Naturally the Ubuntu development team isn’t going to be hands-off. Mark reassures that “there is still a substantial desktop team, focused on delivering a high quality desktop for everybody to use. I care about the desktop as a first class part of our service to the world.”

To this end he says to expect that “upgrades, integration, security, performance and the full experience are fantastic” — and I personally wouldn’t be surprised if we saw some theming and branding tweaks here and there too.

Indeed, as Shuttleworth himself says: “our true focus is on the end-user experience which means getting things right at the distro level since that’s what users touch.”

What happens to Unity 7?

The future for Unity 7 is, in many ways, a continuation of its current state: maintenance. Unity hasn’t seen significant development effort for several years, with only minor tweaks here and there to keep it ticking along.

“Unity 7 will continue to be carried in the archive”

Mark says he fully expects that Unity 7 packages (and presumably all the forks of GNOME components it relies on) “will continue to be carried in the archive”.

“I know there are quite a few people who care enough about it to keep it up to date. I expect it will be in universe for 18.04 LTS.”

As Unity 7 remains perfectly functional I’m glad that it’s not being jettisoned knee-jerk style, but will instead remain available for those users who want to keep using it.

Snaps Are Here to Stay

Snaps are fantastic. They make running apps safer, can be run on multiple desktops and distros, and introduce transactional updates that reduce the size of updates (as only the bits of an app that have changed get updated).

“Snaps continue for Ubuntu and other distributions…”

And, credit where credit is due, we have the Ubuntu phone/convergence diversion to thank for Snaps.

“Snaps continue for Ubuntu and other distributions (now Fedora, openSUSE, Debian and others). They will also integrate fully with GNOME, KDE, etc”, he says. “They are an amazingly clean way to deliver apps and since most of the major software companies target Ubuntu this is a good way to enable other distros to benefit too.”

This is not a surprise as Snaps (and indeed Ubuntu Core, an all-Snap based version of Ubuntu) remain a key part of connected devices, cloud and IoT strategies.

Ubuntu Core is the super minimal version of Ubuntu designed for embedded devices and the ‘internet of things’ (IoT) and based on Snappy (see above).

“Ubuntu Core is coming along nicely,” Shuttleworth says. “It is still very device-centric (it feels like its on rails compared to classic deb-based Ubuntu which feels like it is on a mountain bike with fat tires and gears that let you go anywhere :)) but I think that the core/classic divie (sic) will soften as more developers use Core for cloud or device projects. The basic idea of an all-snap desktop is pretty amazing.”

Ahh, Mir. Canonical’s controversial attempt to create a modern, effect and adaptable display server for Linux. And, as it’s being used in a number of IoT projects, “…that code continues to receive investment.”

But the wider ramifications for Mir as a general all-purpose display server is less clear. It’s highly unlikely that Canonical will aggressively push Mir as a Wayland alternative for general Linux computing, much less port GNOME Shell to run on Mir.

Wayland, however, is going places. It is backed by many major Linux distributions (and is already shipping in Fedora) and has the backing of several major GPU vendors. With momentum growing behind Wayland there’s likely to be little tangible benefit to use Mir.

What Happens when Upgrading from Ubuntu 16.04 LTS?

Many Ubuntu users have known nothing but Unity, including many, many LTS users. When they upgrade from Ubuntu 16.04 LTS to Ubuntu 18.04 LTS next year they’re going to be in for a shock: an entirely new desktop environment, interaction method, new apps…

Shuttleworth isn’t too worried about this being a traumatic experience, and says he feels sure that “the desktop team will make upgrading from 16.04 LTS Unity to 18.04 LTS GNOME pretty clean.” 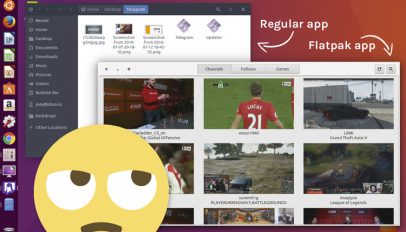 Flatpak Apps Are Awesome, But Boy Do They Look Bad on Ubuntu
Read Next