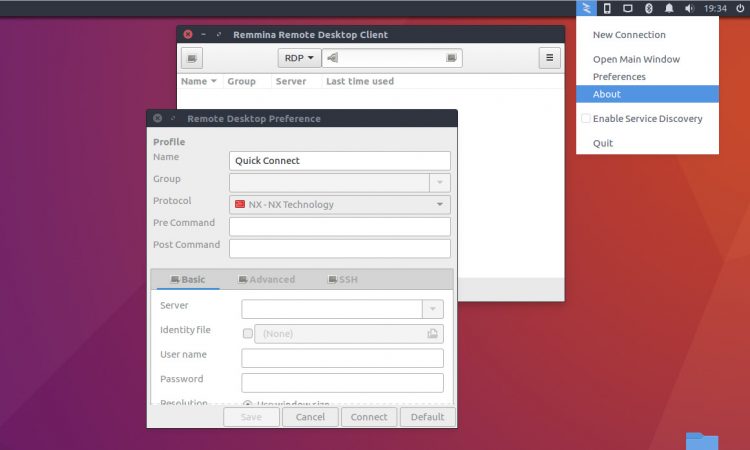 Do you use the remote desktop app Remmina? If so you may be interested to know that a Snap package of the latest release is now available on Ubuntu.

Also Read: How To Install Snap Apps on Ubuntu 14.04 LTS

Remmina is one of the less glamorous desktops apps that ship with Ubuntu by default. It’s not new by any means, having replaced TSClient as the default remote desktop app on Ubuntu way back in the dust of 2010.

What is Remmina Again?

Remmina is a GTK+ remote desktop client for Linux. It considers itself well suited for a wide set of users, from system administrators to home users, either at work or on the go.

“Remmina supports multiple network protocols in an integrated and consistent user interface. Currently RDP, VNC, SPICE, NX, XDMCP and SSH are supported,” says the official website for the app. The app is able to maintain a list of profiles, and can sort connections in to separate groups for advanced management.

The new Remmina Snap app gives you the very latest 1.2 release, which is more current that the version of Remmina shipping in Ubuntu 16.04 LTS and 16.10 right now.

The Snap is also maintained by a core developer of the app, so you can be sure that if something doesn’t work they’ll work to get it fixed as and when they can.

And that’s important because Snap integration on the ‘classic’ Ubuntu desktop is (currently) far from perfect. For example, you’ll notice that the app doesn’t respect your GTK+ or icon theme. It’s a cosmetic issue, granted, and (thankfully) one that doesn’t affect the core functionality of the app.

A Unity quicklist is present with shortcuts to launch the app and create a new connection profile, and you’ll see a fully-filled tray icon in the indicator applet area too.

If you’re itching to install Remmina 1.2 on Ubuntu safely, without losing access to the regular stable version, you can do so very easily — and without needing to add the Remmina Next PPA!

Using the following Snap package you can run the very latest development version alongside the stable version, without either affecting the other.

The Remmina Snap package also bundles a couple of Remmina plugins, including XDMCP and NX. You don’t need to download these separately as you do with the regular version as both come preinstalled.

This will instantly download and mount the Snap package. Once it has completed you can launch the app from the Ubuntu Dash.

The ‘Snap’ version of the app has a newer icon than the stock version:

Apps How To remmina snap apps