Last week I wrote about the new release of Kdenlive, a popular Qt-based open-source non-linear video editor for Linux.

Kdenlive is hugely popular and for good reason — it’s fast, easy to use and mostly stable.

But open-source is all about choice, and in the comments section to that article many of you wrote about your experiences with other well-known video editors.

Among those mentioned is long-time fave OpenShot, the hard-to-use Cinelerra, the buggy Shotcut, and (though not strictly a video editor) the powerful Blender.

One app that wasn’t mentioned in the comments was Flowblade, a Python-based video editor for Linux.

And that got me wondering as to why…

Flowblade Video Editor: What Can it Do? 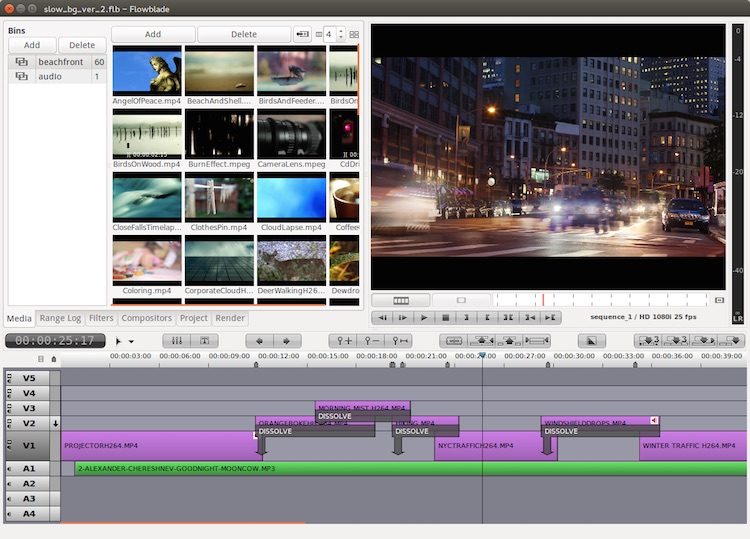 According to its website, Flowblade is “designed to provide a fast, precise and robust editing experience,” making use of “a film-style insert editing model as workflow.”

It offers basic editing tools, including 3 move tools, 3 trim tools, and 4 methods for adding/appending clips to the timeline.

These tools, while great, do mean that Flowblade is not the easiest app to master. The way it handles clips is obtuse if you’re learned in apps like Kdenlive, Adobe Premiere Pro, or Final Cut. For example, there’s no ‘razor’ to cut a clip in half, and you can’t drag and drop a clip to anywhere you want in the timeline.

Beyond editing basics there are 9 video and audio tracks available. This makes it fairly easy to do some fairly complicated edits, including overlays, picture-in-picture and audio mixing.

The editor also supports 6 compositors, including mix, zoom, move and rotate. It supports keyframed animation, and has 19 “blends” including add, hard light and overlay, and offers more than 40 pattern wipes.

Phew! Not content with stopping there, the most recent release introduced support for the G’MIC effects tool, affording editors even more crazy customisation controls:

You can edit videos in most common video and audio formats, including mp4, ogv, mov, etc., but this is dependent on the FFMPEG or MLT libraries you have (or don’t have) installed.

Most image formats are also supported, including JPEG, PNG, GIF and SVG. You can also import numbered frame sequences.

Projects can be rendered and exported in common media file formats, though this is (again) dependent on the FFMPEG or MLT libraries already installed.

Flowblade is a free, open-source app and is available to install on Ubuntu.

If you’re using Ubuntu 14.04 LTS or Ubuntu 16.04 LTS you can install an older version of the app straight from the Ubuntu Archives.

If you would rather use the very latest release the developers have a pre-compiled installer for Ubuntu users available to download on the project website:

Note: If you have Kdenlive or OpenShot installed the app won’t run due to a conflict in MLT libraries. To work around this you’ll need to purge Kdenlive/Openshot and remove their respective PPA.

Is It Any Good?

My own personal experience with Flowblade is mixed. It’s a very competent editor, and one of the more stable video editors on Linux. It does have a learning curve because of its preference for 3-point editing, a style popular but very much a personal preference.

Modding the comments on the Kdenlive article I was struck by the lack mention that Flowblade received. For what looks like a mature, well-featured app I’m wondering why people don’t talk about it more.

Since you’re the biggest group of Linux users I know, I figured I’d ask you about your experiences with it.

Have you used the app? How do you find it compares to OpenShot, Kdenlive or other more commonly recommended video editors? Have you even heard of Flowblade before? Would you recommend it to others?

There’s a comments section below waiting for your thoughts!

Home » Apps » Flowblade Linux Video Editor – Is It Any Good?