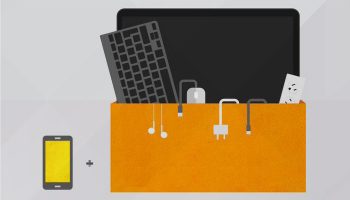 Canonical is not the only software company who is interested in the idea of using a single mobile device to power additional computing experiences.

But software is only one side of “convergence” — there’s also the hardware that leverages it.

Windows 10 Mobile saw Microsoft introduce its most accomplished implementation of its adaptable OS vision so far with its feature called Continuum.

Unlike Ubuntu Convergence, which can run any Linux software re-packaged for ‘Snappy’ on virtually any device, Continuum only run applications built on the Universal Windows Platform (though, like Ubuntu’s Snappy Apps, these too can run across desktop, tablet and phone).

Enough exposited bull-cr*p? Grand. On to the point of this post: A new patent filed by Microsoft has gotten a few Ubuntu users worried.

OMG! Ubuntu! reader David Van R. was among the concerned when forwarded us news of the patent: “Based on what I read, would this not then put Ubuntu’s Convergance platform in violation of that patent?”.

This post is tagged ‘Frack Knows‘ because I am not — somewhat thankfully; I imagine it’s tedious profession — an intellectual property expert.

But what I can understand of this specific patent application is nothing of major concern to Ubuntu on the software side.

Patent, Or No Patent

First things first: Microsoft’s patent application is yet to be granted, as far as we can ascertain. It was filed back in the summer of last year.

From a layman’s glance the patent is focused on the idea of, to put it bluntly, shoving a Windows Phone inside a tablet-sized touch screen, a high-res monitor — heck, even both at the same time!

This isn’t new; Motorola had a ‘lap dock’ for its Atrix smartphone, the ASUS PadFone extends a phablet into a, er, slightly larger phablet, and years back there was even a tiny UMPC running Windows Vista — ! — that was able to ‘dock’ into a desktop.

Ubuntu (as well as Apple, Google, and other company) has also been very public in demonstrating similar functionality to that described in this patent description (which you can read in full below).

Microsoft even notes some of the ‘other attempts’ in its patent:

Though, as I said: I am not a patent expert, Microsoft’s patent seems to focus more on how the hardware enables the ‘convergence’ experience rather than the abstract software technologies that glue it together (hence the use of terms like “apparatus and methods” and “phonepad”, and no mention of the OS, e.g., Windows 10 ;)).

Superficially parts of this patent description could be applied to pretty much any big-name technology effort in the smartphone era, including Ubuntu’s goals for convergence, Apple’s ‘Continuity’ and Intel’s Android/Debian stuff mash-up.

But is Ubuntu likely to be hindered by this? Canonical filed its own patent on convergence back in 2013.

You can read the whole patent over on the WIPO archive, or click the button below to unveil the full spiel (sorry, since removed).

Rafael Martines Much better now, I got really confused with the old…
elementary OS 6 Intros a Simpler Alt Tab Experience

lestcape It's a personal preference, you are wrong here, you are…
5 Best GNOME Shell Extensions for Ubuntu