The BBC was among several well-known press outlets to cover the Ubuntu Phone showing during Mobile World Congress 2015.

The veteran British broadcaster published a two minute video  on Canonical’s pitch at MWC on the technology section of its news website.

In the clip auntie’s resident technology reporter Rory Cellan-Jones gives the Meizu MX4 Ubuntu Edition a quick paw before asking Canonical CEO Jane Silber if Ubuntu has a chance of going mainstream in a mobile world dominated by apps, Android and other emerging alternatives.

Silber — who, incidentally is one of the nicest people you could ever meet — walks Cellan-Jones through the key proposition of the Ubuntu Phone concept (i.e., Scopes) and explains the advantages the technology brings.

BBC: ‘Hands-on with an Ubuntu phone at MWC’

The BBC wasn’t the only well-known news outlet to stop by the Canonical stand in Barcelona during the three-day long event, nor was MWC the sole concern of some of the articles that went live during it.

Reviewer Damien Leloup spent some time with the €169 device and found the hardware to be okay for the price, though notes that the gesture-heavy navigation does take a while to get used to — even for a Linux user!

The OS’ frequent updates and customisation options were listed by Leloup as things he ‘likes’ about the phone, while the ‘complexity of the interface’ and the frequent bugs and crashes he experienced during his time with the handset were listed as things he didn’t like.

Ultimately, the “radical choice of interface” left him cautious to recommend it to anyone other than enthusiasts, surmising it is best suited to Le Monde readers who already like Ubuntu, who use few apps and are looking for a low-cost phone. He adds that it’s not for (their) readers on the hunt for an ‘easy to use’ phone, or who rely on popular apps, or want a device that’s powerful enough to play lots of games.

Back to Mobile World Congress and The Verge shared their thoughts in a lengthy article calling the Ubuntu mobile project ‘an audacious attempt to take on Android’.

After recapping the key features of the OS (i.e., gestures and scopes) it finishes up by stating that both Bq and Meizu Ubuntu Phones offer a ‘simple, fresh experience that could be more than serviceable for those with reason to believe’.

Finally, Engadget’s Nick Summer also had some MWC booth hands-on time with the Meizu MX4, and wrote up his thoughts in an article titled: ‘Ubuntu’s answer to Android is finally here, but it still needs work’.

Summer describes the OS as ‘refreshing’ thanks, in part, to the fact it’s not Android or iOS, but noted that, to him, the software on show at MWC felt rough around the edges and a little ‘beta’ like.

“The adapted Meizu MX4 and BQ Aquaris E4.5 represent a huge milestone for Ubuntu on mobile. But it’s difficult to imagine Canonical attracting any significant market share in the near future — in fact, the staff I spoke to in Barcelona said they had already accepted this fate. These devices are for the Ubuntu fans, first and foremost. It’s a niche proposition and will remain so until Canonical improves the software and attracts new hardware partners. It’s not the most exciting state of affairs, but at least the company is being realistic.”

The real test for Ubuntu on Phones isn’t what reviewers think but that of real, everyday users. Folks like you. Do you plan on buying an Ubuntu Phone?

Thanks to dstaubsauger for helping with Le Monde translation 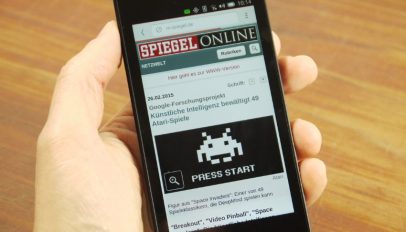