If you jumped on the upgrade to 13.10 but immediately regretted the decision when Amazon Prime* (US), or 4OD and Demand 5 (UK) stopped working, there’s hope around the corner.

The internet offers up an array of tutorials for reenabling protected Flash content on Linux. The bad news if you’re on Ubuntu 13.10 is that most of them no longer apply.

To play DRM content, Adobe Flash requires a package called HAL (Hardware Abstraction Layer) to be installed. Although HAL has been deprecated on Linux for a good couple of years now (replaced by udev) it remained available for install from the Ubuntu repositories.

Until now, that is.

Ubuntu 13.10 no longer offers HAL in its repositories – a move that makes playing Flash video using DRM a little trickier.

The good news is that you can get Flash video streaming services that are encumbered with DRM to work in Ubuntu 13.10. It just takes a little bit of effort.

For example, you can follow this guide to download the HAL packages from the Ubuntu 13.04 repos, install it, patch it, reset Flash licenses and create the necessary HAL folders and, in theory at least, you should be good to go.

However, the manual method didn’t work for us. Thankfully something else did….

Ubuntu user Michael Blennerhassett maintains a PPA for Ubuntu 13.10 only that contains the required HAL package, along with a patch from (the always awesome) Arch Linux folks that fixes several issues that result from using the older HAL package in Saucy.

To add the PPA open a new Terminal window and enter the following commands carefully:

Having installed from the PPA, we tested Amazon Prime in both Firefox and Chromium using the version of Flash in the Ubuntu repos. We found that Amazon Prime didn’t work with Chrome’s built-in version of ‘Pepper’ Flash.

For more information on the PPA hit the link below.

Home » How To » Get Amazon Prime, 4oD and Other DRM-Protected Flash Working in Ubuntu 13.10 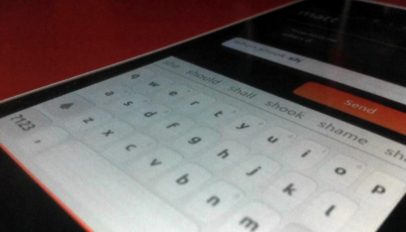 How To Enable Predictive Text On Ubuntu Touch 1.0
Read Next