Last week saw the first Linux release of ‘To Do’ application Wunderlist.

Whilst the release was more than welcomed by Linux users, the inability to install it – and then access it – as simply as a typical Ubuntu package put many potential users off.

The following how-to aims to rectify that by making Wunderlist easily searchable and launchable via the Unity Dash.

How to Create A Launcher Item for Wunderlist in Ubuntu

The first step is, if you don’t already have it, download Wunderlist, and extract the archive package in to your home folder. This last step is important as the command we’ll use below is based on this location.

Now onto creating a shortcut for it.

A blank Text Editor window will open. In this you should paste the following, replacing ‘YOURUSERNAME” with, well, your user name!

Hit save and then exit the text editor.

Hit the Ubuntu logo to reveal the Dash and search for ‘Wunderlist’. Once found just click the icon to launch or drag and drop the icon onto the Unity Launcher for a handy shortcut.

That’s it; providing you don’t delete the Wunderlist folder you will be able to easily launch the app from the Dash or Unity Launcher. 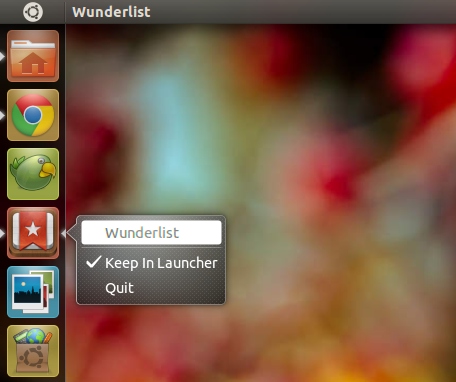 Adapted from a guide posted on elsoftwarelibre (Spanish)

How To quicklist todoapps Unity wunderlist