“Arrrrrrgh” said the bear with the sore head when trying to run ‘xkill’ in Unity. “Why doesn’t pawing ALT + F2 work in here?!”.

It’s something which I know has perplexed, bamboozled and annoyed the frell out of many readers who have upgraded to Ubuntu 10.10 Unity.

Thankfully it’ll be one of the many things fixed in Unity come 11.04 but, if you can’t wait until April 2011 to flex your fingers, here are some alternative ways to run commands, launch apps and stretch those digits using ALT+F2.

Gnome-Do can open, launch and execute a whole world of wonders when called – search google, send text to pastebin, upload photos or just launch an application. For those who desire some visual slickness in their launcher Do is the undisputed choice. 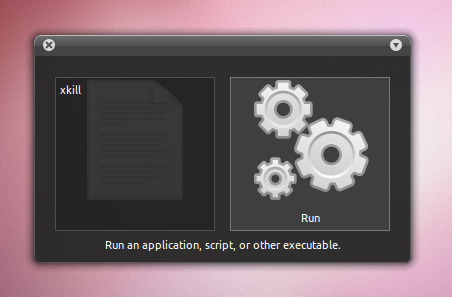 2. Take Alawalk for a walk

Launch your applications/command whilst using very little memory with Alawalk.

And by ‘very little memory’ I mean very little – Alawalk uses barely above 65KiB of RAM when in use.

Alawalk comes with many-a plugin from Google search to Tweeter. It uses a custom set of commands for a few things but all is explained in the ‘Read Me’ file included in the download.

Another work around to the lack of ALT+F2 freshness is by use of Gmrun – a small dialogue window that can be configured to show on shortcut.

Gmrun has terminal-style TAB completion amongst other standard fare. Unlike other entries in this list it doesn’t use window controls.

Gmrun can be installed via the Ubuntu Software Centre.

Want your launcher to have automatic auto-complete (as opposed to tab completion)? gRun steps up to the challenge. It’s small, can be configured to run on a keyboard shortcut and, whilst lacking some of the advanced features others in the list can claim, it does have a ‘memory’ for swift access to your most commonly used commands.

gRun can be installed via the Ubuntu Software Centre.

5. Be lazy, use the terminal

Finally if none of the candidates bring balm to your each keyboatd-shortcut-loving fingers there is always the terminal ready and waiting. Add it to your Unity launcher for quick access and et voila – problem almost solved.

No need to stress out too much Mr Bear. Maybe you should go find whoever broke in to your house, ate your porridge and slept in your bed before stealing your prize collection of Ubuntu release CD’s, hmm?