Today our compendium of computing curiosities (commonly called ‘OMG! 5!’) sees us poke around in the software drawers of everyone’s favourite social network Facebook.

Below you’ll find five Facebook-only notification applications for use on the Ubuntu desktop.

A tool simple in its aim: you whack in your Facebook notification feed and, at an interval definable by you, it checks what’s new and alerts you accordingly.

It makes use of a standard GNOME tray icon and the resulting ‘notification window’ is far from bling-beauty, but its easy to set up and even easier to use.

A .deb file is provided on the projects’ Sourceforge page.

It’s a shame the tool doesn’t use an Indicator Applet rather than the increasingly defunct and démodé trappings of a regular applet. Nevertheless  you can manually replace the default icon with one of your own choosing; replacements should be dropped in

RSS-Facebook-Noifier can only rustle up two Zuckerburgs – it’s functional but could be a lot better than it is.

Not only does it ‘notify’ you of updates but you can respond, like and even update your status direct from the desktop.

The application is installed in ‘Applications > Internet ‘ sub-menu.

Wallbox gets four Zuckerburgs out of five for features, but loses one point for the lack of clear branding.

Facebook notify has Ubuntu users catered for with support for native notification out of the box. 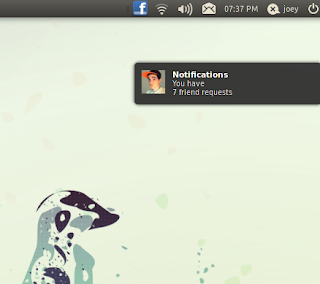 Before downloading do check that all required dependencies are installed;

Extract the archive and move the resulting folder to somewhere ‘safe’.

Enter the folder and double click on ‘facebook-notify.py‘, choosing ‘Run’ when prompted. The Facebook icon will appear in your system tray. Left-click on this to login and start receiving alerts!

If you’re looking for something much smaller and much less annoying than the above then consider a Facebook notification ‘screenlet’ (desktop widgets for Linux) such as the, very obviously named, ‘Facebook Notifier Screenlet’. 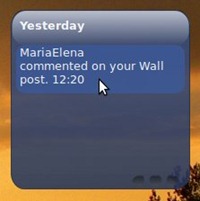 It doesn’t do much else other than display notifications but clicked notifications do open directly in your browser which saves time. As for extras you’ll need to look elsewhere – but with a screenlet you don’t need much else right?

It does what it claims to and not a jot more. For that it earns a duo of Zuckerburgs.

Finally no list would be complete without mentioning the one application available on Ubuntu by default that can do all of the above and more: Gwibber.

This you can find under Applications > Internet > Gwibber Social Client. Authorize Facebook for use with it and away you go.

It allows you to receive notifications via the Messaging Menu, respond to alerts, post status updates etc.

It’s integrated into the desktop and there by default. Ease of use and availability scores Gwibber a full house of five Zuckerburgs.