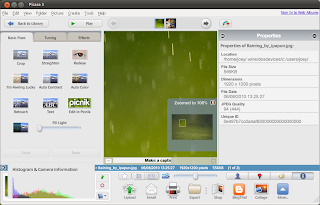 Google Picasa 3.8 was released yesterday to much online fanfare.

A bunch of neat new features landed including: –

and the show stealing

Ubuntu users don’t have access to a neatly packaged version of 3.8. Here’s where Wine comes to the rescue as installing the Windows version via WINE enables us to still use many of these nifty new nuances.

Installing Picasa 3.8 in Ubuntu via Wine

You will need a copy of Wine installed beforehand (click to install) and then a copy of the Windows installer for Picasa 3.8 (download here)

First let me break the bad news: the Face Movie feature does not work in Picasa 3.8 via Wine or via our previous hacks. Hopefully a bright spark will get it up and running at some point but for now you’re going to have to go without.

The ability to use Picnik editing seems to require installing Flash, via Wine, however I ran in to all sorts of hiccups and errors trying to get the feature working – hopefully you’ll have better luck than I.

Now some good news: pretty much everything else does work as it should – batch uploading, auto-face recognition, Picasa web sign-in, photo uploading, etc.