The new Date Time indicator that is all-set to replace the Gnome Clock applet in Ubuntu 10.10 will certainly make your life easier: A slick interface combines easy access to set timers and events direct from the menu & integration with Evolution, resulting in no-more reams of menus to change an option or setting. It is, as Jono Bacon likes to say, going to rock.

One thing that it won’t do, however, is tell you the weather.

Forecasting a change
In anticipation of this two plucky guys (from the OMG! Ubuntu! IRC channel! – Sebastian and Cullen) have begun work on creating a weather indicator applet. It’s still in the early stages of development but if you are able to lend a hand it should be ready to warn you of hurried hurricanes, twisty tornadoes and light rain just in time for Maverick.

But how did it come about?
“I like to know the weather.” project member Cullen says matter of factly when I asked why he specifically got involved in the project. “That and I like designing things. I really wanted [the applet] to look great so I decided to make some mock ups for Seb. He liked them and it went from there.”

The design of the applet has a clear emphasis on keeping what works from the current design whilst also aiming to add one or two visual touches to make the passive informative role of the applet that little bit more helpful – such as the abilty to switch between locations from the menu itself. 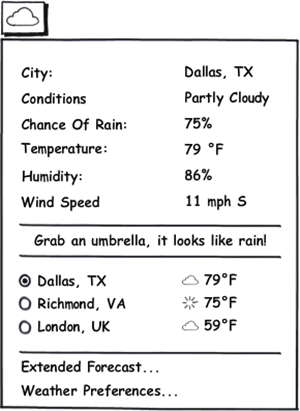 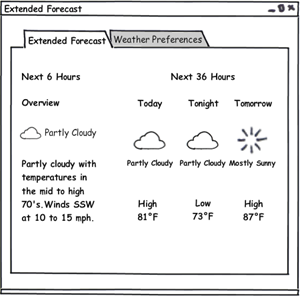 The mocked-up preferences menu (though not yet implemented) shows a lot of promise. The aim is to afford users a wide range of customizability and decision in what, how and when their weather applet informs them. 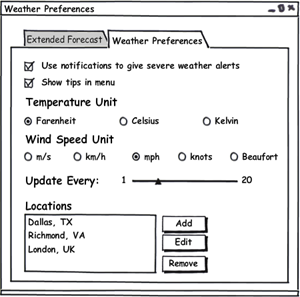 Why not a widget or a docklet? Expectation.
I asked Cullen why he thought an indicator applet would be a much better fit for a weather notification service than say a desktop widget or docklet: –

“Because a widget is either on your desktop and covered by a window, on top of your windows bothering you, or in a widget layer that requires a key press to view while an indicator is always right there on the panel just waiting for you quietly as it displays.”

The fact users, so frightened of change, may miss being able to enable weather updates in the panel certainly hasn’t passed the two-man team by either and thanks to the flexibility of the Indicator API Sebastian has been able to turn his idea from an IRC conservation into a functioning panel applet in a very short space of time.

So far… so good!
The applet can be installed via PPA which will provide updates until the applet hits stable pre-alpha but be aware that, at the time of writing, it lacks advanced configuration options – but these are coming! You can set your location and see some info from it (in imperial measurements) but not much more.

The Indicator icon changes to an appropriate weather icon depending on the forecast – so knowing what’s up (or about to come down) is never more than a glance away!

Your help
The application has advanced in a very short space of time thanks to the hard-work of Sebastian but it could do with a few more hands on deck (I’ve run out of weather puns) so if you know some python, are a dab-hand at bug fixing, etc and would like to help out then do! You’ll find the project @ launchpad.net/weather-indicator


What would you like to see in a dream weather Indicator?
Hourly notifications?Ability to ‘hide’ certain stats from the menu? Wax lyrical in the comments.