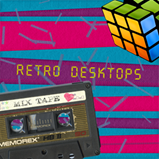 With a move towards every sleeker, ever more visually animated desktop themes and GUI’s it’s easy to forget how far the themes we use now have come along in such a short space of time.

We kick off this rundown with the dull  grey styling’s of Windows iconic pre-Crayola theme. If you so wish you can almost faithfully recreate it in Ubuntu using the Gnome Redmond theme, a similar metacity and an icon pack. 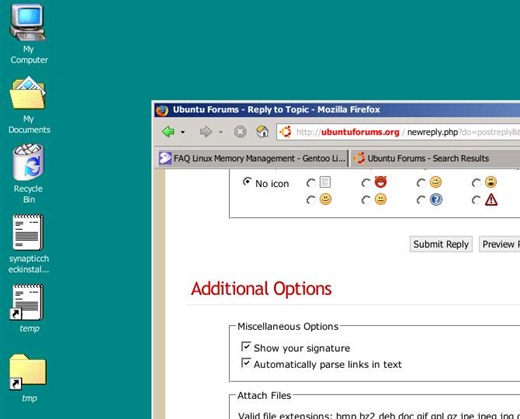 See this Ubuntu Forum thread for a blow-by-blow how-to.

NeXTSTEP was a promising UNIX-based operating system that began life in 1988 and ended it’s formal life in 1996. NeXTSTEP is best known for that little known-Macintosh operating system called ‘OS X‘ being a direct descendant of it.

NeXTSTEp had a very distinctive look and feel. Distinctive enough to warrant a semi-port project – entitled GNUStep – aiming to bring the look and feel of the long-forgotten OS to Linux. (I should also point out that GNUStep is much, much more than simply a ‘theme’ – see here for more on it) Whilst the project hasn’t really progressed much in the last few years it is still available to download and install. If you’re curious-come-bored installing GNUStep wouldn’t be an entirely awful way to waste a weekend.

The almost 20-year old BeOS sported a GUI “developed on the principles of clarity and a clean, uncluttered design” and for many BeOS enthusiasts out there (such as the Haiku project) the GUI remains a distinctive part of the BeOS legacy.

AmigaOS 4 perhaps shouldn’t be classed as ‘retro’ given it’s last update was only 54 days ago however the AmigaOS remains nothing more than a nostalgic interest for most hence its inclusion here.

The theme above is a GTK version of the AmigaOS 4 ‘zami’ theme and can be downloaded here.

IBM’s OS/2 operating system – initially jointly produced with Microsoft – had a very tumultuous time and the history of the OS makes for great reading. It was once heralded as the ‘OS of the future’! Sadly it wasn’t to be largely due to Microsoft’s bundling of Windows with every new PC bought. It had an ‘ok’ gui for the time and for those who remember OS/2’s GUI the GTK version below is a good effort of an adaptation.

I dearly wanted to include an old skool Acorn GTK theme but couldn’t find one, the same goes for ‘classic’ Mac OS.

What is your favourite ‘retro’ OS/GUI? Is it available to install? Share below!

vtpoet //How can GNOME with its simplicity be in the way…
Never Miss an Email Again: Gmail Notification Extension for GNOME Shell

Fernando Santucci I prefer to get all notifications from my Android smartphone…
Never Miss an Email Again: Gmail Notification Extension for GNOME Shell