I previously covered Ubuntu Karmic desktop and Kubuntu Netbook Remix, but despite using Karmic NBR i haven’t really touched on it! Until now… 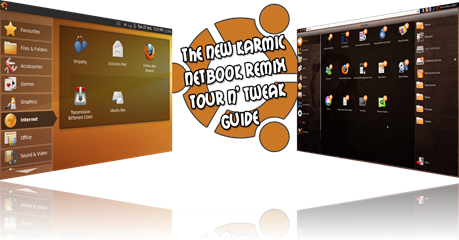 The majority of features in the Netbook Remix are the same as the desktop version. NBR is mostly about optimizing the user experience and specific tweaks to netbook specific hardware. That said, it does fail on a  number of fronts so I’ll be popping in some tweaks and tips along the way.

Let’s begin with a quick over-view!

The install process takes the same shape as with the desktop version but the install screens are maximized and fit lovely on even 7” screens. 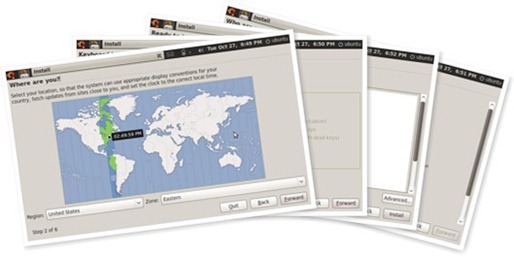 Installation itself is super quick on SSD’s. My install took less than 10 minutes.

The new “launcher screen” packs in much more space than it’s predecessor. 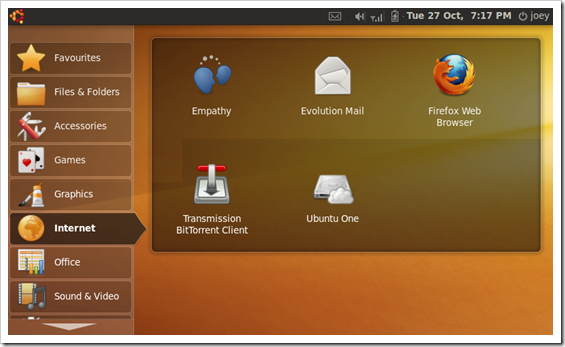 You’ll notice a new sidebar on the left and the removal of the sidebar on the right. This is a genius of a change and really makes the whole netbook interface shine with usability.

Most of the applications available in the Desktop version are present in the NBR with the addition of Cheese Webcam Booth.

You get the full OpenOffice suite, Firefox 3.5, UbuntuOne, etc

I would have liked to have seen a few more “web” apps such as a Gmail shortcut or Prism app, Gwibber and the Anjai netbook  interface for Evolution. Still most of these can easily be added by the user.

I find Ubuntu NBR 9.10 performs marginally better than it’s predecessor. I’ haven’t run any benchmarks to prove this so it’s netirely subjective – but in all honesty that’s what counts. An app may be refined and faster but it doesn’t feel any faster it’s almost irrelevant. I’m assuming KNBR has the new ‘netbook-launcher’ to thanks for this elegant usage ‘feel’.

Okay, now onto my “issues”…

One gripe i have with Firefox 3.5 in NBR is how badly it fits to small screens.

I only have a 7” EeePC so screen estate is a maaaaaajor issue for me. As such if i were to use Firefox I’d change it from it’s stock interface from this: – 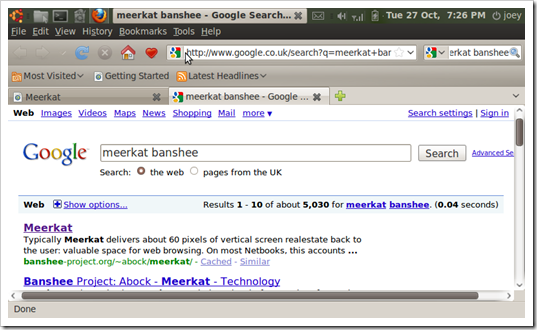 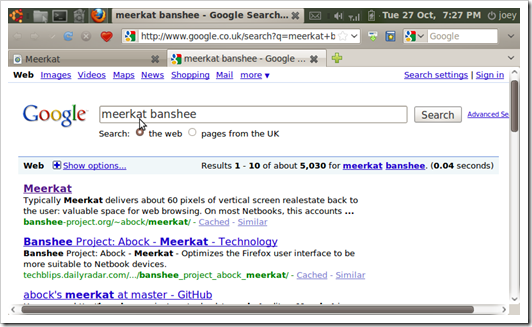 By installing ONE extension: Meerkat.

I must confess that one of the first things i do on any fresh Ubuntu install is get myself Google Chrome. I adore this browser – and on a netbook it’s even more evident how awesome it is – Try opening Firefox and Chrome on a netbook processor and you’ll see what i mean. 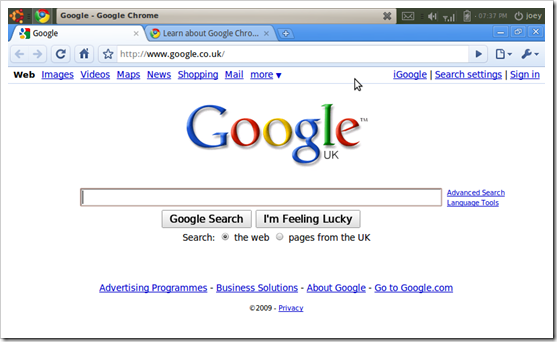 Installing Chrome also saves space when it comes to “creating web applications. It doesn’t require an extra package or plugin unlike Mozilla Prism.

Enable Compiz for a slick experience

In previous version of Netbook Remix compiz wouldn’t work alongside the netbook launcher, thankfully now it does. Hurrah! Enable them and minimize a window and see what i mean. “Slick” just about covers it.

Get some space by uninstalling unneeded applications. I never use OpenOffice on my netbook, nor do i play the stock gnome-games. Am i going to be managing an entire folder of photos? No, so bye bye f-spot.

Think about alternatives – i do some simple word processing on my netbook so i install AbiWord (which can open Microsoft formats, too.)

I also purge evolution and create a GMail Chrome web app instead. Same for Google Docs and Facebook. These all run much nicer in toolbar free Chrome web-apps, too. 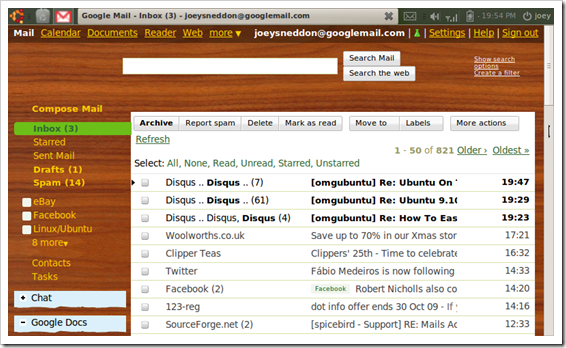 The default fonts are set at size 12. This is HUGE looking on tiny screens. Change the size or the font or both! 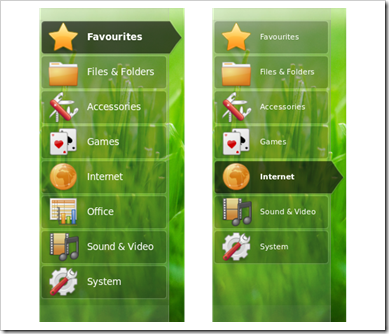 Original on the left, change on the right.

Although there’s not an awful lot unique to netbook remix to touch on, it’s a superior experience over all to the 9.04 version. It also easily beats the rest of the Ubuntu-based netbook “distros” such as EeePeasy & Jolicloud by being easier to install, easier to use and ships with just about everything one needs. (Perhaps it ships with too much, but that’s moot.)

If i had to choose between Kubuntu NBR and Ubuntu NBR i would find a touch choice to be made.

Kubuntu, as i mentioned when reviewing it, provides quite possibly the best “web device” experience on a non-moblin device, sadly it has some real user-interface gripes – that start with the installer not fitting on to certain screens meanign you have to install using logical thinking and the tab key… It also doesn’t run anywhere nears as smoothly and the default set of applications borders on the laughable.

Ubuntu NBR on the other hand provides the best overall netbook experience from both an application point of view and a performance one, too.

It’s just a shame there isn’t a “midbuntu”; a version that combines both feature sets out of the box. Ahh, well here’s to Lucid Lynx Moblin Remix!