Adwaita stans listen up: that exceptionally sweet theme pack you can use to make Firefox look like GNOME Web has been updated.

And I don’t mean ‘updated’ in the sense it just supports the latest Firefox 102 release – that’s a given. Rather, the Firefox GNOME theme has been updated to follow GTK4/libadwaita styling.

Something I know I’ve been waiting for.

It means you can very easily make the latest version of the Firefox web browser looks über integrated and ingratiated on the GNOME 42 desktop (well, those GNOME 42 desktops where the default Adwaita theme is in use).

Once applied, Firefox goes from looking like this (demoed on Fedora, don’t judge me):

As well as benefitting from a tidy rejigg to adhere to the (many) style changes libadwaita brings (like nice rounded menu selections) the latest version of the Firefox GNOME theme also includes:

You’ll find all the details you need on the project’s GitHub page, including an easy to use ‘paste this command’ option:

This downloads, unpacks, and then applies the theme to an existing Firefox install, be it the Firefox .deb or binary (note: the install script doesn’t work with the Firefox Snap by default but you can manually install it).

There are also some optional tweaks you can choose to make after running the install script, like hiding single tab bar, moving the new tab icon to the toolbar, enable symbolic tab icons, and more. There’s also details on an upstream bug with sharp window corners which you can fix in both X11 and Wayland.

As the Yaru theme is based on Adwaita the theme does offer a Yaru variation. I chose not to feature this in the screenshots as the window controls are bolder than the standard Yaru ones making it look a bit off.

Finally, keep in mind that this is not a regular Firefox theme so the “uninstall” process is a bit different. 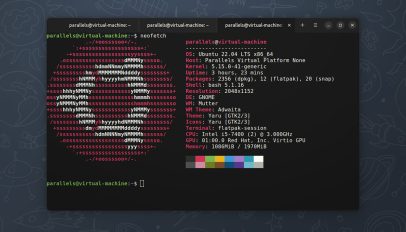