If you’re yet to settle on a note-taking service that works across platforms you may want to check out a new option now available for Linux: UpNote.

Now, I will mention upfront that the UpNote Linux client is Electron-based, and it is closed-source, proprietary software.

The service does offer a free tier that lets you create “up to” 50 notes using basic features but you will need to shell out $0.99/month subscription (or pay a $19.99 one off fee) to create more than this, and unlock advanced options like tables, attachments, and extra export options.

If you’ve read all of that preamble and you’re still interested, then UpNote does, at first blush, appear like a well designed and capable application able to provide some competition to tools like Microsoft OneNote and Evernote:

UpNote does have a couple of cute features of its own, like being able to set a custom image for covers of notebooks; an easy-to-access version history for all notes; and a toggle to enable an ‘always on top’ option (which is handy when transcribing notes from other apps).

And if you’re willing to pay you can access a variety of different themes and fonts – perfect for creating a “workspace” that feels entirely to your vibe.

Sadly I do find that UpNote’s “Markdown support” — touted as a key feature, no less— a little caveat-y.

Firstly, not all of Markdown’s features are supported (including tables, footnotes, superscript1, emoji, auto-URL creation). Secondly, there’s no easy way to edit markdown as text (i.e. no ‘raw’ view); you can only edit using the WYSIWYG. Finally, export to markdown is paywalled.

UpNote is closed source, proprietary software. At present the only way to install UpNote on Linux is using the Snap Store (which won’t please everyone). The developers have expressed an interest to support Flatpak once it’s Electron support is bolstered.

Do note that it’s not currently possible to “upgrade to premium” from the Linux app. To subscribe you’ll need to do so using the official Android and iOS apps and then login to your account in the Linux app. This will then ‘unlock’ premium features.

Once upon a time I was fairly okay with Electron apps but, as time as gone on, I’ve become a little less enamoured (as long-time readers have picked up on since I rarely write about them these days).

If you give the app a spin do let me know (and other readers) know what you think about it, as well as what your Linux note-taking preferences are.

1 UpNote does support super/sub script via its WYSIWYG 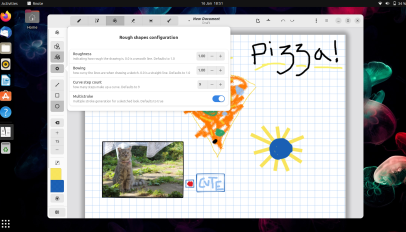