GNOME Shell’s unique panel corners are being retired after more than a decade of decorating peoples desktops.

If you haven’t used a vanilla GNOME session you might not know what these are. Many downstreams, including Ubuntu, patch out this subtle frame in their respective Shell .css.

See if you can spot the panel corners in this screenshot of stock GNOME Shell running on Fedora:

Not quite spotting it?

Hey: I did say they were subtle! 😅

The curvaceous cornicing helps to visually denote the desktop workspace and neatly “hugs” the corners of maximised windows (in themes that use rounded corners). The overall effect that is pretty pleasing on the eye:

But no longer: GNOME devs have removed the .css panel corners from GNOME Shell going forward.

Since I hit publish on this post GNOME devs have gone on to share the rationale behind their decision. They describe the corners as “a dated bit of stylistic flair” that would’ve required too-great of a radius to “match the updated style of libadwaita”. That increased radius would have affected the presentation of non-libadawaita apps on the desktop. Easiest solution? Retire them — plus there may be performance gains to be had in doing so.

With no rounded corner to snuggle into, maximised app windows in GNOME 42 will be sharp/square/flush with the top bar (similar to how Ubuntu does it, rather than the macOS approach of leaving a gap anyway).

Panel corners never ranked in “reasons to use GNOME Shell” lists but I found them an interesting “gimmick” (to quote GNOME developers) that added a little visual signature to the GNOME desktop experience.

Sad to see them go? Pleased to see them retired? Let me know your thoughts down in the comments — just keep things civil, please! 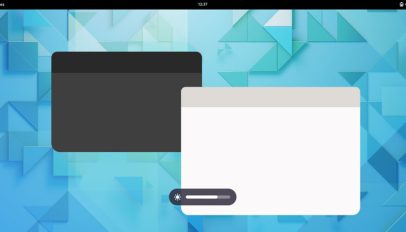 GNOME Shell is Getting Redesigned Volume/Brightness Pop Ups
Read Next