The legendary Shutter screenshot tool is back from the dead and once again available to install on the Ubuntu desktop.

Fresh off the back of its GTK 3 port, new builds of the go-to screen capture n’ annotation tool (it does more than just take screenshots, as we’ll get to) are being packaged for Ubuntu and related Linux distros through an official PPA.

If you read this site regularly you might recall we wrote about a half-broken Shutter Snap app (totally unofficial and very unstable) a year or so back. Forget about that — sudo rm -rf forget.

But now that Shutter is revived and its official PPA has been restocked, Ubuntu users can once again go hands on with the real thing, right now.

Before we look at how to install Shutter on Ubuntu, Linux Mint, and any other Linux distro based on Ubuntu 20.04 LTS here’s a recap on the tool’s core feature set, direct from the developers themselves:

“[Shutter is a] feature-rich screenshot program. You can take a screenshot of a specific area, window, your whole screen, or even of a website – apply different effects to it, draw on it to highlight points, and then upload to an image hosting site, all within one window.”

I first wrote about Shutter in 2009 and used it, more or less, as my default screenshot taking and screenshot markup tool up, right up until the wheels fell off sometime in 2016. It’s great to see the app back and while other tools, like the terrific Qt tool Flameshot (on our list of the best Ubuntu apps) function as solid stand ins, I do have a particular affinity for this utility.

Shutter’s editing/markup/annotating tools are robust and allow you to quickly add (and move/edit) arrows, shapes, icons, call outs, text, counters, and more. You can also crop images and use the ‘pixelate’ tool to glitch-out any sensitive data on show, like email addresses (or in my case, the omg! staging server address in Firefox screenshots).

Shutter is once again active development. New releases are made often and can be found on the Shutter GitHub page (which is where development is now focused).

To add the official Shutter PPA (which only contains packages for Ubuntu 20.04 LTS and 21.04 at the time of writing) run this command in a new Terminal window:

Followed by this one to actually install Shutter on your Ubuntu, Linux Mint, or other supported distro:

Finally, launch the app using your preferred app launcher and the rest you can take from there!

At present Shutter only half-works on Wayland. The app does open and you can edit screenshots (or open screenshots to edit), save them, upload the, etc. For now, you can’t take screen grabs in Shutter on Wayland. Wayland handles screen-capture very differently to Xorg. Further work in this area will be required to get Shutter working on Wayland.

How To App Updates shutter 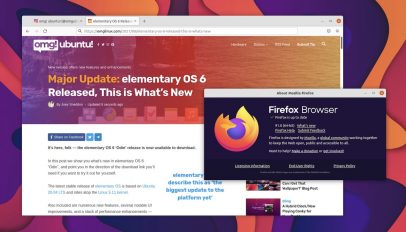 Firefox 91 is Out with Improved Cookie Management
Read Next