For Ubuntu to adopt GTK4 in a future release it’s going to need a GTK4 version of its iconic Yaru theme — and what do you know: one is in the works!

Ubuntu cited a lack of compatible theming in its decision to stick back on GNOME Shell 3.38 and not introduce GTK4 in the upcoming Ubuntu 21.04 release.

But half of that testy conundrum is closer to being solved. GTK 4 support has now landed in Yaru’s code repo, albeit labelled as a work-in-progress.

Ubuntu’s Yaru GTK theme intentionally sticks close to the upstream Adwaita theme maintained by GNOME (and the theme many app developers would prefer you to use). The syncopation has many benefits, and has helped mitigate the trickiest part of the GTK4 port as a new theme hasn’t had to be created from scratch.

Not that many users will notice a difference — and that’s sort of the point. A user shouldn’t be able tell if the app they’re using is GTK4 or GTK3 (though they may be able to tell from other features provided in GTK4, like in-app transitions and media, scalable lists, drag and drop, shaders, and more).

There is room for error and divergence and quirks, especially at this early stage. As GTK4 adoption picks up pace and more users experiment with GTK4 (particularly on the Ubuntu desktop, but not exclusively; you can use Yaru theme on other Linux distros too) more issues will be found and then fixed.

More work will be required when the GNOME 40 design rejig is complete as the ‘new’ GNOME Shell looks (and works) a bit different to the current one!

But progress as to start somewhere; to know GTK 4 support for Yaru is in the works (and looking pretty on point already) is reassuring — certainly bodes well for Ubuntu making a belated switch to the updated toolkit come Ubuntu 21.10. 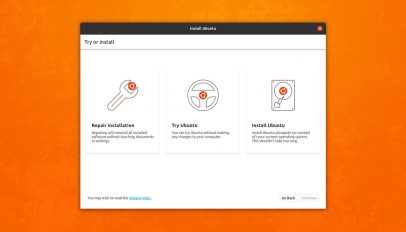 Ubuntu is Working on a Brand New Installer
Read Next