Ubuntu 18.04.4 LTS, which arrives a week later than planned due to a few last minute issue, serves as the penultimate point release in the Ubuntu 18.04 LTS release cycle.

As ever there’s not much that’s “new” per se. An Ubuntu point release is simply a freshly spun install .iso that features all of the OS fixes and improvements released to the OS since last install image was issued.

Or, to word it another way, point releases are a shortcut; a hop on point for new users. They still install the same OS that was released back in April 2018, but without the hassle of having to download the 100MBs of updates released to it since.

Arriving alongside the release of Ubuntu 18.04.4 LTS is the 18.04.4 LTS HWE, or new ‘hardware enablement stack’. This is composed of a newer Linux kernel back ported from Ubuntu 19.10, updated graphics drivers, and newer display server (where applicable).

The Ubuntu kernel shipping i this update is based on the Linux 5.3 release. This kernel update adds, among many general impromvents, hardware support for new MacBook laptops, AMD Navi GPUs, and several Wacom graphics tablets.

If you installed Ubuntu 18.04 LTS in April 2018 you won’t get the new HWE update automatically unless you’ve specifically opted in — but you can install the HWE easily by running this command from a new Terminal window:

Ubuntu 18.04 is the latest long term support release of Ubuntu and is supported with on going updates until 2023. 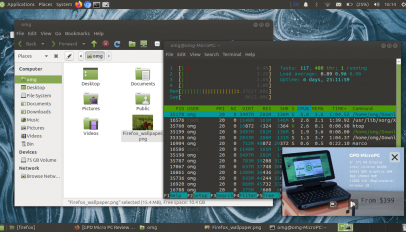 MATE Desktop 1.24 Release Arrives with a Slew of Improvements
Read Next