Ubuntu 18.04.2 LTS is available to download, albeit a week later than originally planned.

The update serves as the second point release in the Ubuntu 18.04 LTS ‘Bionic Beaver’ series, and brings an updated Linux kernel and graphics drivers with it.

Ubuntu 18.04 LTS really is a long-term support release as it’s supported with ongoing updates until 2023 on the desktop.

What’s the point of a point release?

Point releases play an important role in the life of an LTS. These freshly pressed ISOs combine all of the key software updates, bug fixes, and security patches pushed out to an Ubuntu since the last ISO was made.

Why is that important? Convenience and security. Rolling together all of the updates issues since the last point release saves new users from needing to download and install several hundred megabytes worth of updates right after install. It ensures critical security vulnerabilities are patched on new systems, too.

By and large Ubuntu 18.04.2 LTS is very similar to previous iterations. There are a number of major performance fixes for GNOME Shell and Mutter that aim to reduce memory usage, lessen CPU spikes, and result in smoother UI animations.

Updated apps are onboard too, including the latest Firefox 65, Thunderbird 60.4 and LibreOffice 6.0.2 releases

The main selling point of this (indeed, any) point release is the inclusion of an updated hardware stack (HWE). This point release’s Linux kernel and display server stack is derived from Ubuntu 18.10 ‘Comsic Cuttlefish’.

Ubuntu 18.04.2 LTS runs on the Ubuntu Linux 4.18 kernel. This is same version as shipped in Ubuntu 18.10, released last October. It’s a notable uplift from the Linux 4.15 kernel included in Bionic originally.

These critical updates are gold as they prove new and improved hardware support for PCs, laptops and hardware released after the original LTS first appeared.

Getting the latest HWE

Those who installed Ubuntu 18.04 LTS in April of last year will not get the new hardware updates automatically — but they can opt-in to receive them.

Those who opt-in, as well as those who install Ubuntu using this new image, will benefit from the new hardware enablement stack, and will be able to upgrade to newer versions of the stack as they’re released.

If the HWE tickles your fancy and you’re running Ubuntu 18.04 LTS you can opt-in to receive it by running this command:

If you’re running Ubuntu 18.04 LTS and think you’re missing out on something here let me tell you that you’re not. Point releases are intended for those who have yet to install Ubuntu, less those already running it.

So long as you have installed all available updates you technically have Ubuntu 18.04.2 LTS. 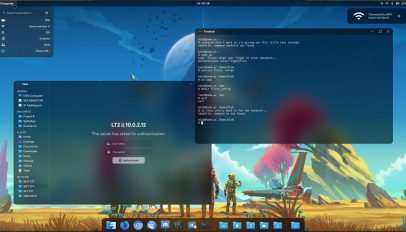