Hot on the heels of the Ubuntu 19.10 beta come freshly spun test builds from Ubuntu’s family of flavours, including Ubuntu MATE and Xubuntu.

By now we now have a pretty solid idea of the sort of features and changes each Ubuntu spin is offering.

So I figured I’d assimilate all of that info into an easily digestible post like this rather than, er, well, just ignore the flavours until release day like I normally do! 😅

Ubuntu MATE 19.10 is (as ever) a sizeable update, gifting the Linux distro with a nostalgic ethic some additional treats to play with.

You have have heard that Ubuntu MATE ditches VLC in favour of GNOME MPV (which is now known as Celluloid), so if you’ve a fan of the former you’ll now need to install with your own fair hands (don’t worry upgraders, it won’t vanish).

Talking of things being dropped, Compiz and Compton are no longer part of the default install. Marco, an MATE desktop window manager, has matured to the point where other compositing options don’t need to be offered (they remain in the archives, of course).

Marco fixes include XPresent support (i.e. no more screen tearing), while game frame rates and general HiDPI support are said to be better than before.

Other notable additions — honestly: read the full announcement post for more details because there’s a tonne of stuff— include a new ‘notification centre’ applet with ‘do not disturb’ mode, a new screen magnifier, and assorted theme and UI nips and tucks.

Want all that and more? G’won…

The new Xfce 4.14 release serves as the foundation for Xubuntu 19.10, giving this much loved spin some additional finesse.

Xfce 4.14 introduces a new “missed notifications” applet. I’m not sure if that’s included in this beta as, at the time of writing, Xubuntu’s release notes weren’t up on the wiki.

That said, one of Xubuntu’s USPs is that it offers a stable and reliable user experience. So fans of the distro shouldn’t be too surprised to hear that there are (probably) no “major” changes included.

Updated versions of core apps like Firefox and LibreOffice are also included.

The Kubuntu archive now sports the latest versions of some popular KDE apps, including Latte Dock and the Kdenlive video editor.

If you prefer Ubuntu with KDE you’re probably using KDE Neon, but if, for whatever reason, you’re not, you can take Kubuntu 19.10 for a spin using the link below.

With no new Budgie desktop release to speak of Ubuntu Budgie 19.10 is left to feather its nest with iterative improvements — but there’s still lots to see.

Ubuntu Budgie 19.10 beta includes an improved alt-tab switcher for fast moving between open apps; a slate of new Budgie applets, including a fuzzy clock and brightness controller; and a new set of new wallpapers.

All of the core benefits of Ubuntu 19.10 are present, such as Linux 5.3, NVIDIA drivers on the ISO, etc.

The Ubuntu flavour I’m not overly familiar with, but many of you are, is Ubuntu Studio. The “creative” choice continues to do what it does best: provide a solid platform on which to showcase the best creative tools open source has to offer.

For Eoan this includes an improved version of Ubuntu Studio Controls (best described as a guide to configuring the bistro for music production). This, notably, includes a new indicator to let you know if Jack is running (or if he’s walking, ho ho no) and other jack-related tuning.

The latest available versions of Audacity 2.3.2, Kdenlive 19.08 and Blender 2.8.0 are included (as you’d expect) but they’re joined by a new app this cycle: OBS, the open source game streaming tool popular with Twitch users (and indeed now sponsored by the platform). 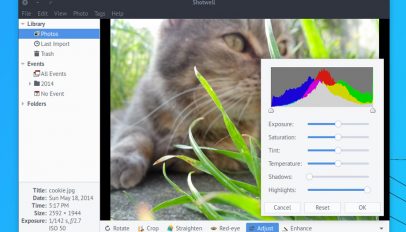 GNOME Will “Vigorously Defend” Shotwell in Lawsuit
Read Next