Remember the Exaile music player? If you don’t you’ve kinda got a good reason as the app hasn’t been updated in years — or so I thought.

It turns out that this long-forgotten music library-come-player quietly squeaked back into life in the summer with the release of Exaile 4.0.0.

Exaile, for those who don’t know about it, is a GTK-based music player that was (arguably) most popular during the “halcyon” days of omg! in 2009-2012, aka the era of apps like CoverGloobus, Docky, eMeSeNe, Songbird, et al.

But the player (like other great apps of its time) soon faded from earshot as the music player scene solidified around apps like Banshee and Clementine and music streaming services like Spotify, Pandora and Deezer.

Exaile 4.0.0 is the first update to this GTK+ based music player in four long years and sees the app finally ported to GTK3.

Among a bunch of other modernity benefits this toolkit bump means Exaile can play nice with ‘dark mode’ themes, HiDPI displays, and modern Linux distros.

The Exaile playback engine was also rewritten to support gapless playback, fade in/out, and crossfading, add support for .aac and aif files, and handle music libraries of up to 50,000 music tracks in size.

“Visually, longtime users will recognize Exaile 4.0.0 as the latest iteration of Exaile, as it will feel very similar to previous releases. However, internally 4.0.0 is a significant change from 3.4.5,” the team say of the release.

“The biggest change in Exaile 4 is that it uses GTK+ 3 and GStreamer 1. Existing users are strongly recommended to upgrade because GStreamer 0.10, used in earlier versions, is unmaintained and may contain security issues.”

Other changes in Exaile 4.0.0 include:

One thing to note: if you’re currently using Exaile 3.4.5 you may need to rescan your library after upgrading.

Interested in taking Exaile 4.0.0 for a spin? Source code is available to download on the Exaile website (though make sure you satisfy the dependency requirements prior to building).

As of writing the app isn’t available through a PPA, or via Snap, Flatpak and AppImage — something I hope will change soon so that more people get the chance to sample this oldie but goodie.

Home » News » Exaile Music Player Got Its First Release in 4 Years, And I Didn’t Even Notice! 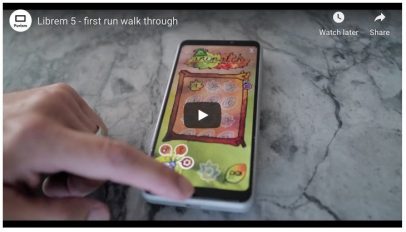 New Video Demo of the Librem 5 Shows That …It Actually Works Okay?!
Read Next