If you’re on the hunt for an advanced monitor wallpaper manager for Linux, Superpaper might be just the ticket.

Superpaper is a multi monitor wallpaper manager for Linux (though it also works on Windows too). It was written in Python specifically for this task, after its developer, Henri Hänninen, says he “couldn’t find anything similar”.

Wallpaper managers designed for multi-monitor set-ups aren’t super common, though we’ve looked at one, Hydrapaper, before.

I don’t have a multi-monitor set-up to test the app with (I’d love to, but I’m not rich enough or productive enough for two displays) but I figured I’d throw word of this app out anyway as it looks like it could well be of use to others.

From dual monitor set-ups, to stacked monitors and a mix of landscape and portrait monitors, Superpaper is a monitor wallpaper tool that can help. Use it to set different wallpapers on different monitors, use the same image spanning several monitors, and more.

Superpaper comes with all of the core features you’d expect in a wallpaper manager, including:

But it goes beyond that the basics by offering advanced features that I can’t say I’ve seen in other tools. Such as:

Another plus is that the Superpaper wallpaper app is not tailored to or built for any desktop toolkit or desktop environment in particular. Accordingly, it is said to work with:

Interested in trying Superaper out to see if it can satisfy your desktop wallpaper desires? The good news is that it’s easy to!

Simply download the pre-compiled Linux binary from the project’s GitHub release page using the button below, give it the necessary permissions, and run:

Because the Superpaper binary file ships with all the required dependencies so it’s a little on the heavy side at 101MB. A script is also available but it requires you to take care of dependencies manually — a hassle, but surmountable.

You can learn more about Superpaper, its features, and report any errors you encounter whilst using it, on the project GitHub page. 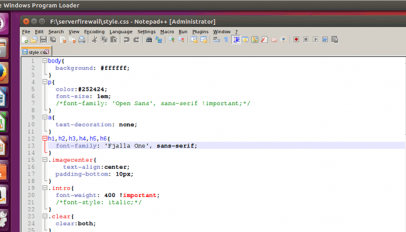 How to Install Notepad++ in Ubuntu (One-Click Install)
Read Next