The final, stable Ubuntu 19.04 release is out, and based on the results of recent intentions poll, a titan-sized troupe of you plan to upgrade to Ubuntu 19.04!

But what if you’re not sure how to?

You won’t miss out on any of the new features by performing an in-place upgrade, and so long as you install all available updates as and when release, you’ll be running the exact same system as those who did a fresh install.

First up: let’s address the LTS-shaped elephant in the room.

If you want to upgrade to Ubuntu 19.04 from 18.04 LTS you might be frustrated to hear you can’t, at least not directly.

You could even dual-boot Ubuntu 18.04 LTS with 19.04 (using the “install alongside Ubuntu 18.04 LTS” option in the installer). That way you get to try the latest release, whilst keeping the former around should anything go wrong.

It’s super easy to upgrade to Ubuntu 19.04 from 18.10 since you already have everything you need.

That said, do make a backup of any important files or critical settings just incase something goes wrong.

Also make sure the internet connection you’re using is stable, and won’t vanish mid-way through the process.

When you’re ready, pop open the Software & Updates app and run a check for updates. So long as you’re checking after the release date the tool should inform you that a new version of Ubuntu is available for download.

Alternatively, to do the same thing via the command line, run:

If you don’t see any update listed, and it’s well past April 18, something, somewhere has gone wrong — perhaps try the steps below.

This section won’t apply after April 18, but if you want to upgrade early, you can.

But whatever, right? You may want to get in ahead of the crowds, a little early, to skip the slow-server issues. It’s what I do, myself!

Just install any last minute updates that arrive around the 18th and, voila, you’ll be on the GA build like the rest of the world.

To upgrade to Ubuntu 19.04 pre-release from 18.10 you just need to pop open a new Terminal window (Ctrl + Alt + T) and run the following command:

Enter your user password as prompted. The do-release command will then proceed to query the Ubuntu servers for information about the development release (aka Ubuntu 19.04).

Then, the command will query the list of packages on your system to see what needs to be upgraded. It will notify you of the size and scale of this, plus warn if any software is incompatible, or will conflict with the upgrade.

Note: you will need to resolve any issues listed before you can proceed with the upgrade.

Once you’re happy (and able) to proceed tap the ‘Y‘ key (for ‘Yes’) to continue. The necessary Disco repositories will be added to your system and the relevant updates downloads, unpacked and installed.

Upgrading isn’t fast, mind. The time it takes to complete will depend on your internet connection and the connection to the selected mirrors. I recommend you grab a drink or play some terminal games to amuse yourself while waiting.

Regardless of which method you choose the actual upgrade process is the same: lots of files are downloaded, unpacked, and installed.

When everything is done you’ll be told to reboot your system. Cross your fingers, hit reboot, and then…

How To disco dingo ubuntu 19.04 upgrade 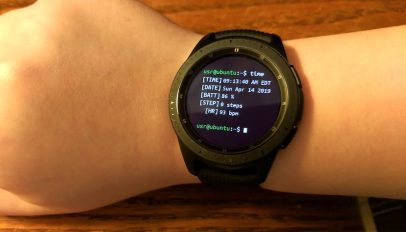 Ubuntu Watch Face for the Samsung Galaxy Watch
Read Next