GNOME 3.32 is out today, and brings a crop of new features and enhancements to the Linux desktop.

Among the changes on offer in GNOME 3.32 is a new icon set and theme refresh, a bunch of (much needed) performance patches, and new versions of core apps like the Nautilus file manager.

In all, GNOME 3.32 is a major upgrade. And as it’s is the world’s most popular free, open-source desktop environment, a major upgrade is major news to its millions of users.

There’s plenty more to learn about, so join us as we take a look at the best new features of GNOME 3.32.

GNOME 3.32 is the first version to support fractional scaling, an oft-requested feature that allows everything on screen to look ‘normal’ on HiDPI monitors.

The downside is that it is, for now, an experimental option that works on Wayland sessions only.

Yup, fractional scaling is not enabled by default, despite being a biggie.

To enable fractional scaling in GNOME 3.32 you need to a) use Wayland and b) manually add scale-monitor-framebuffer to the gsettings key org.gnome.mutter.experimental-features.

A big shout-out to Canonical for helping to plumb in support for fractional scaling values. You can swot up on the technical details in this blog post. 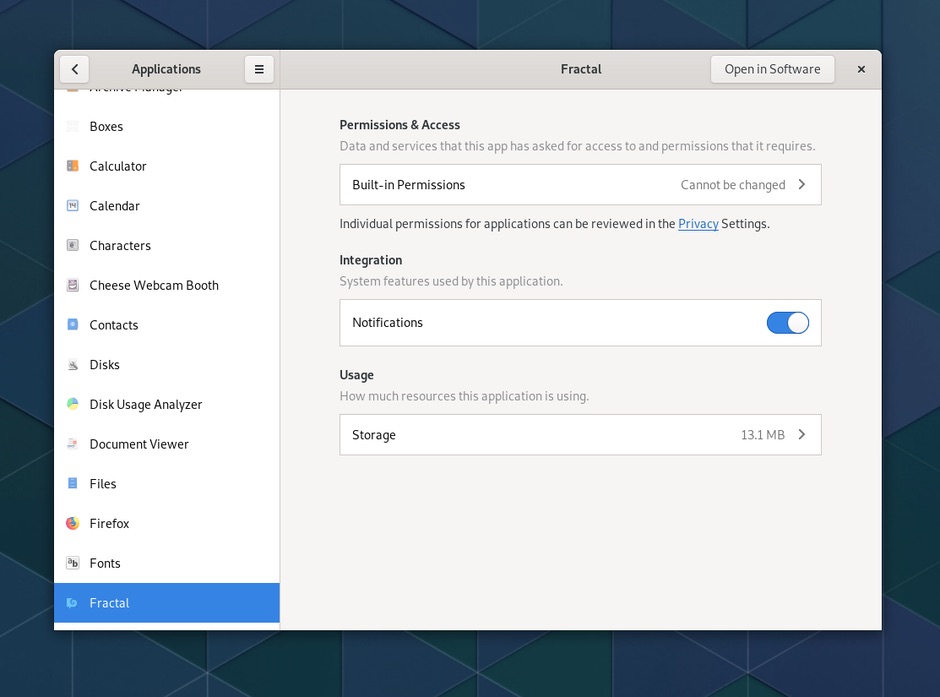 GNOME 3.32 gives you more control over how installed apps behave and what they can access whilst running.

The new Settings > Applications pane lists all installed applications (repo and Flatpak). Click on an app for an overview of its key settings and permissions.

There are toggles for things like app notifications, sound and search, as well as configurable permissions for Flatpak applications. Some built-in permissions can’t be changed, e.g., Nautilus having access to your file system.

On a related note, Flatpak permissions now appear in Software. The app hub has been updated to show which permissions a Flatpak app will have access to should a user choose to install it. A handy heads-up!

For the first time in a long time there are major user interface improvements on offer.

Only dour dumplings could not notice that application icons look dramatically different in the GNOME 3.32 release.

The updated the style of system application and utility icons swaps a  ‘photo realism’ design brief for a flatter, colourful, and more legible one. The new look is rather angular, and many icons sport a forced 3D perspective.

Whether the new icons look better than the old icons is subjective but personally, I think they’re gorgeous.

As well as updating the look of icons this release of GNOME Shell also sports some theme changes.

Like the new icon set, the refreshed Adwaita theme is flatter, lighter, and a touch more modern.

Header bars, buttons, toggles and menus are nimbler, neater, and more consistent. The harsh stroke that surrounded many widgets is replaced by subtle shadows and gradients.

In all, the theme remains identifiably Adwaita, but successfully shakes off the “my first computer” aesthetic. 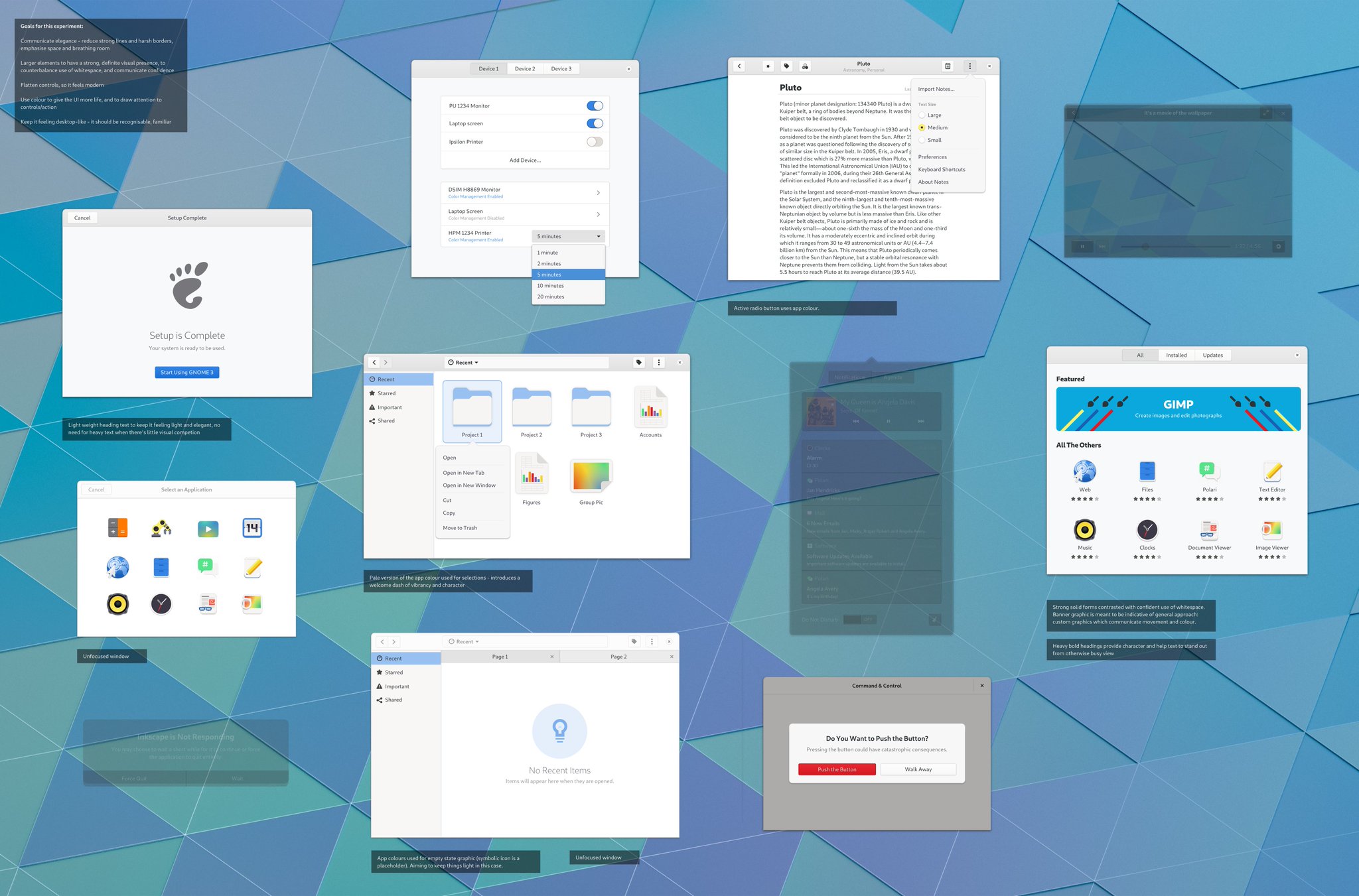 You don’t need to follow Linux news closely to have heard that a core aim of the GNOME 3.32 development cycle has focused on improved performance of GNOME Shell, Mutter, and related tech.

Both Mutter (the window manager) and the GNOME Shell UI are more responsive in this release, with animations, menu unfolding and on-click actions made faster. 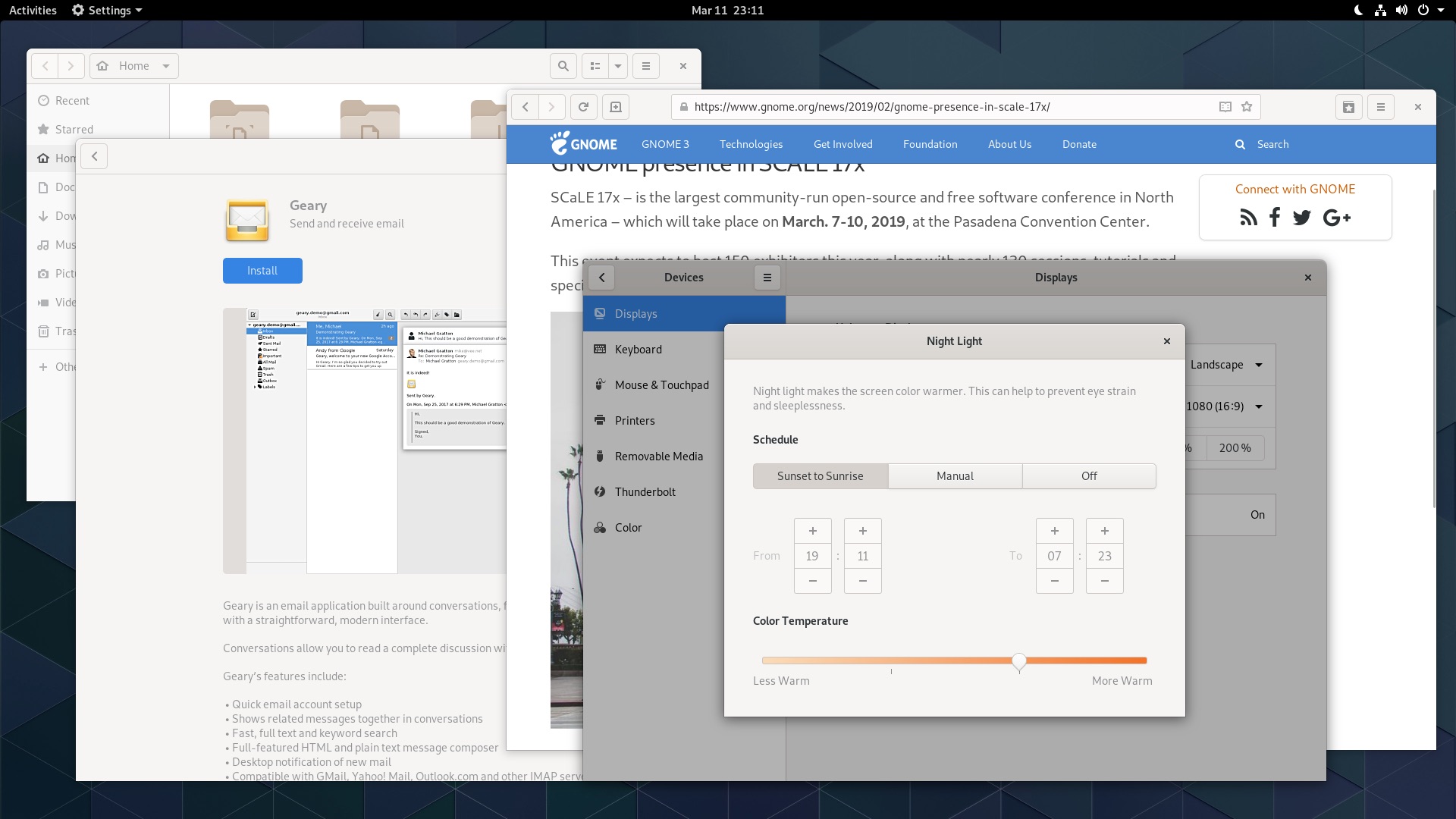 A native blue light filter for GNOME Shell debuted back in 2017, but it is only now that more refined control over the colour temperature is introduced (workarounds and third-party extensions plugged the gap in the meantime).

If you use Night Light, but want it to be a little less/more warmer than the default values use, head into Settings > Display > Night Light to adjust colour temperature yourself.

Application menus (the ones that appear in the Top Bar when an app is in focus) were marked for removal in this cycle.

App developers were encouraged to move the items listed in the ‘App Menu’ to an in-app menu.

As a result of this (unrelated) change a number of apps picked up support for header bars (also known as client-side decoration, or CSD).

The most high profile of these is Rhythmbox, which is improving its look dramatically (though not yet merged) and the GNOME Terminal, which now supports CSD (though it’s not the default).

GNOME 3.32 adds emoji input to the on-screen keyboard. It’s not a groundbreaking change, but it should make it easier to reply with a well-timed emote from a touchscreen device.

Another minor change that most won’t care about concerns user avatars. Any place where a user account profile photo/avatar appears it will appear rounded.

A new ‘fallback’ avatar style is also introduced in this release. Gone are photos of random objects like flowers, coffee cups and tennis balls are and in are plain backgrounds bearing the initials of the account user’s name overlaid (.e.g, “JS” for Joey Sneddon).

Finally we come to the changes affecting the GNOME Software hub (the latest version of which won’t feature in Ubuntu 19.04).

On the whole, searching for new software should be faster in the new build as the AppStream parser has been rewritten.

The new release also improves handling of apps that are available from multiple sources, e.g., VLC being available as a repo app, a Flatpak, a Snap, etc. Certainly for flatpak and repo apps the listings are consolidated, with a source selection on the details pages letting you pick your preferred format.

Related to the software settings touched on in point #2, Flatpak apps now list the permissions they need on the details pages. It also informs you if new permissions are requested by an app during an update – nifty!

We’ve written before about how to access Google Drive on Ubuntu as a remote mount via the Nautilus file manager, using the power of GVFS.

If you take advantage of this feature (I certainly do) you’ll be pleased to hear it’s been made faster.

Actions (copy, rename, open, etc) used to take a couple of seconds (minutes for those with lots of files on Google Drive) to work.

But thanks to a rewrite, Google Drive files display quickly and actions happen instantly, even for accounts with lots of files. The feature should throw fewer errors, too!

The GNOME Shell desktop has never felt as fast or as fluid as it does in this release.

The Adwaita theme and icon refresh breathe new life into a desktop that had begun to lack the visual finesse of other DEs.

And though minor or trivial on their own the cumulative impact of the improved controls and settings, particularly around Flatpak apps, is appreciable. 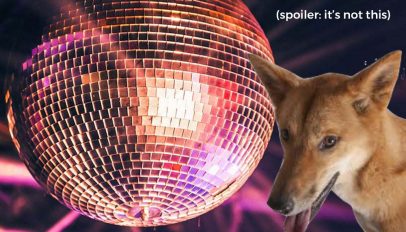 The Official Ubuntu 19.04 Wallpaper Is Revealed
Read Next