Rhythmbox music player is finally sorting its oversized toolbar out!

The next major release of the well-known Linux audio app is set to adopt a GTK header bar by default.

The aim? A refined, more compact toolbar with buttons that are consistent, sharp, take up less room, and better adhere to modern Linux app development trends (like the GNOME HIG).

Regular users of Rhythmbox needn’t panic unnecessarily though. The revamp is not a dramatic., as the comparison below shows: 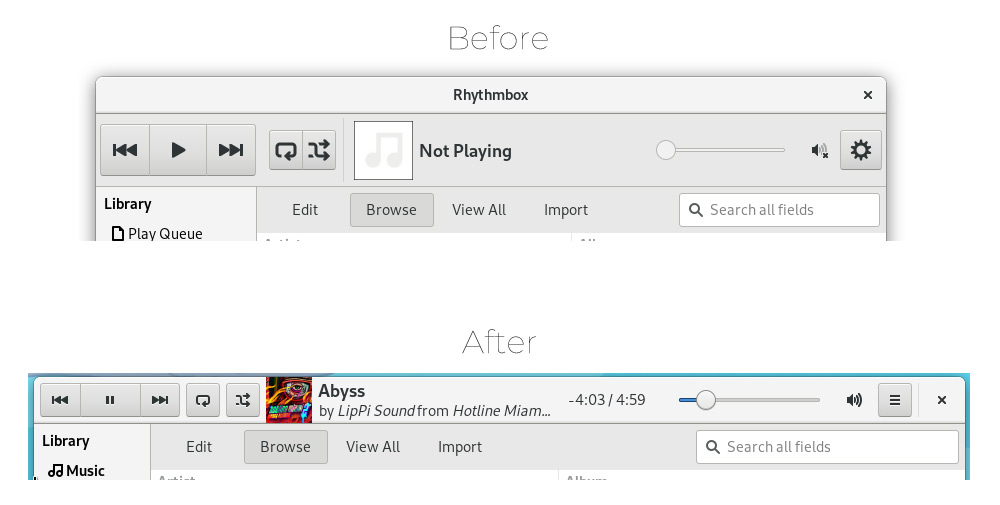 The window title and toolbar merge into a single, unified header bar. The header bar uses smaller buttons and controls (with better spacing too) and includes borderless album art.

Although the revamp looks great under Adwaita, I’m pleased to say it is just as good under Yaru, the default Ubuntu GTK theme too.

You can see the WIP Rhythmbox header bar in this screenshot, built from Git, thanks to @BabyWogue:

You won’t find the new toolbar available in development builds quite yet.

As of writing the new Rhythmbox header bar is a WIP with a merge request pending. GNOME developers sound eager to merge the changes into the master branch in time for GNOME 3.32, which is due for release in the spring.

What about ‘Rhythmbox Alternative Toolbar’?

If you use Ubuntu (and there’s a fair chance you do) you might be confused reading this post. You might be thinking ‘Rhythmbox already uses a header bar… I’m staring at it now.’.

The version of Rhythmbox you will find included in Ubuntu 17.10 or later comes with a third-party plugin pre-enabled by default.

This plugin is called ‘rhythmbox alternative toolbar’ and, as the name suggests, it gives the music player a custom toolbar that uses a GTK header bar (just like the new, native upstream code does):

However there are differences, too. The alternative toolbar doesn’t integrate the player controls at the top of the app like upstream Rhythmbox does. Instead it shunts the player toolbar to the bottom of the window, and re-orders the buttons accordingly.

The alternative toolbar also hides the filter buttons, makes a number of changes to the order of sidebar items, and dispenses with an overflow/app menu entirely.

Overall, the alternative toolbar gives Rhuthmbox a modern and well proportioned new look. It’s easy to understand why Ubuntu devs chose to include it by default back in 17.10.

But will Ubuntu will continue to ship the alternative-toolbar plugin now that the that upstream version will shortly come with native GTK headerbar/client side decoration?