The past 7 days have been pretty dang busy in Linux release land.

We’ve taken a look at the best GNOME 3.28 features, recapped the latest Firefox 59 changes, and made ourselves comfortable with the latest changes to Linux audiobook player Cozy.

Oh, there was also the small matter of Ubuntu 18.04 Beta 1 arriving on the scene, too.

But believe it or not those were not the only notable Linux releases this week!

Below is a terse round up of everything else you might’ve missed, so scroll on to fill yourself in!

Amarok 2.9.0 has finally been released — some three years after it first entered beta!

The Qt-based music player is still touted by some Linux enthusiasts as the perfect music player, thanks to a combination of advanced features, finessed library management, and online integration.

Such is its legacy that the app is undergoing something of a rebirth. A development team has assembled around the app and is making speed on a new Qt5 Amarok, which it hopes to release soon.

But in the meantime it’s bringing some much-needed love, bug fixes and code polish to the older Qt4 Amarok which remains available to install from the Ubuntu repos.

Naturally the release is already available on Arch Linux and other ‘change friendly’ Linux distros. Ubuntu users won’t miss out as Amarok 2.9.0 is on course to arrive in the repos of Ubuntu 18.04 LTS.

An update to the popular Papirus icon theme is available.

More than 30 new icons have been added to encompass coverage of more games, apps and utilities.

Check out our post on how to install Papirus icon theme on Ubuntu & Linux Mint if you’re interested in trying it. 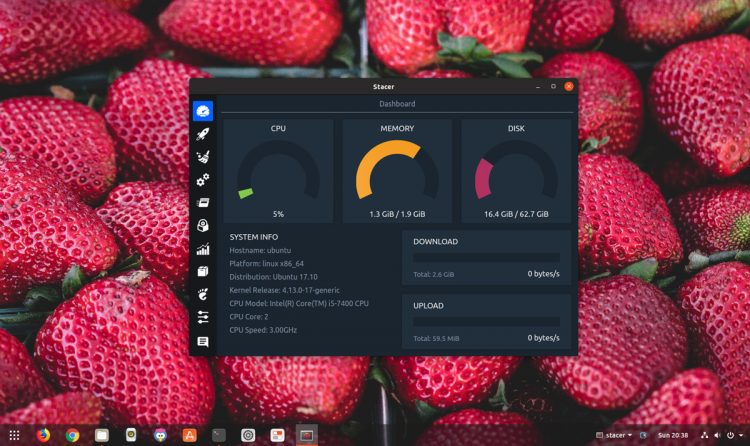 A new version of the Stacer, the system optimizer for Ubuntu, Linux Mint and other Ubuntu-based Linux distribution, is now available.

Elsewhere he app adds an autostart option (should you want it to launch on login) and lets you set a specific panel to open the app on (if, for example, you only ever use it for cleaning, you can set the cleaning panel as default).

You can download the latest version of Stacer as a standalone AppImage from the Stacer Github releases page:

Alternatively, the Stacer PPA will keep you up-to-date with the latest version automatically:

A couple of improvements feature in the latest update to Liferea RSS reader app.

There’s now a plugin installer to discover and install third-party plugins, support for Transmission and Aria as download tools, a handful of bug fixes, and a new command line option to launch the reader with all plugins disabled.

You can download the latest release of Liferea from the project website. A PPA with the latest version is available for Ubuntu 16.04 LTS and above:

Troock Same, and it seems that even hardware video acceleration is…
Ubuntu Makes Firefox Snap the Default

Stefan474 Is there any work being done to update Thunderbird on…
Thunderbird 91 Arrives with Improved Set-Up Wizard, Tons More Changes

OstroLk Another snap lover appears in the horizon...and with the 666...
Ubuntu Makes Firefox Snap the Default