Y’know, maybe GNOME developers are right about needing to remove the desktop feature from Nautilus.

Because, as you’ll see in the video below, GNOME Files (aka Nautilus, because I’m never not going to call it Nautilus) is currently able to draw the desktop surface in unexpected places — like on Windows 10!

Warning: you will want to mute the audio in this video before pressing play.

This isn’t a hoax; the explanation of what’s going on is actually really simple.

In the video above Nautilus is installed on the Windows Subsystem for Linux (WSL), and run using VcXsrv (a Windows X-server based on xorg source code).

As the WSL is based on Ubuntu 16.04 LTS it ships with the older Nautilus 3.16 and the Nautilus ‘desktop’ feature enabled by default. 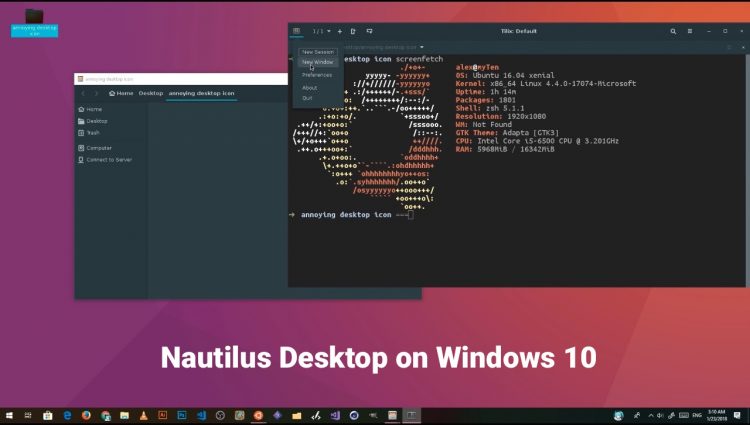 While one might expect WSL apps get preference when “in focus” but the Nautilus desktop remains drawn over the Windows 10 desktop even when switching back to a regular Windows app like Explorer.

The short clip also offers peeks at some other Nautilus features, like the ability to create and rename folders, and launch a terminal emulator.

If, for some reason, you want to replicate WOGUE‘s set-up it shouldn’t be too difficult — but may want to hurry.

GNOME 3.28 arrives later this year, and it removes the desktop feature (the bit that lets you put icons on the desktop and manage them) from Nautilus.

GNOME devs say the desktop code is unmaintained and keeping it around and working is hampering their ability to develop and improve other parts of the file manager.

But if you’re an avid user of the desktop as a desktop you needn’t panic. Ubuntu has decided to stick with Nautilus 3.26 in Ubuntu 18.04 LTS in order to keep the desktop working as expected for its LTS users.

Is Native Linux App Development In Decline?
Read Next