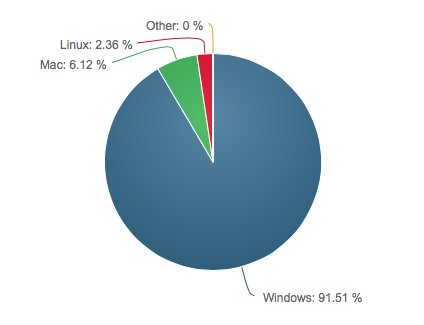 The company report that Linux users made up 2.36% of tracked visits to websites it tracks last month, the highest the Linux figure has ever been.

Not that this uptick is surprising. It continues a trend we’ve seen over the past 12 months which has (more of less) seen Linux usage rank firmly above the 2% line on NetMarketShare.

More impressively, the latest figures means Linux usage is roughly a third of that of Apple macOS, which sits at 6.12% in the June 2017 rankings, down on the previous month.

The combined flavors of Microsoft Windows (who else?) continue to eat up the lion’s share of the desktop operating system chart, falling to 91.51% during the same period.

‘As we always say when we present stats like this: take ’em with a large pinch of NaCl’

As we always say when we present stats like this: make sure you take ’em with a large pinch of NaCl.

It’s because statistics, numbers and reporting methods not only vary between competing analytics companies but are also open to interpretation, debate and potential errors.

Furthermore NetMarketShare accrues its data based on visits to a mere 40,000 websites globally. While 40,000 is a largish sample size it’s also ludicrously small when compared against the number of websites that are out there!

Finally, while the Linux figure reported does exclude Android/Linux it does include ChromeOS/Linux in addition to GNU/Linux, leading some to attribute the rise in Linux marketshare to Google’s Chrome OS.