A fresh slice of GNOME Pie, a slick animated application launcher (and more) for Linux, is now available.

GNOME Pie 0.7.1 arrives out of the oven with basic Wayland support, some minor usability and interaction improvements, plus a layer of pastry flavored patches for previously pernickety problems.

The code for bookmark monitoring has been simplified, meaning GNOME Pie should be faster at updating its bookmarks slice group to match your file system bookmarks and removable devices.

When creating custom slices you can now browse through and pick from all icons stored in ~/.icons — perfect if you fancy borrowing an icon from outside your current icon theme.

There are plenty of bug fixes packed in too, including miscellaneous bandaids for various issues with the Window List group, and Bookmarks slice group.

Wayland support in GNOME Pie 0.7.1 is basic. There is no key-binding support; no mouse pointer warping; no window list slice group; and all Pies appear centered on the screen. If you plan to try this release out please do keep these limitations in mind.

One possible solution that would help solve many of the Wayland-related issues is drastic: rewrite GNOME Pie as a GNOME extension instead of an application.

Curious as to what a possible GNOME Pie extension would look like? Well, you can see a proof-on-concept video of it below, where it’s looking less like a pie and more like a tray bake…

You can launch Pies and sift through their slices without ever taking a finger off your keyboard. Remember that you can also filter through slices using typeahead on your keyboard.

If you’re new to GNOME Pie (or haven’t used it for a while) here’s a recap of the default keyboard shortcuts:

You can customise all keyboard shortcuts you see above using the GNOME Pie > Preferences window (just double click on a pie). You can even bind them to mouse buttons — pretty cool, huh? 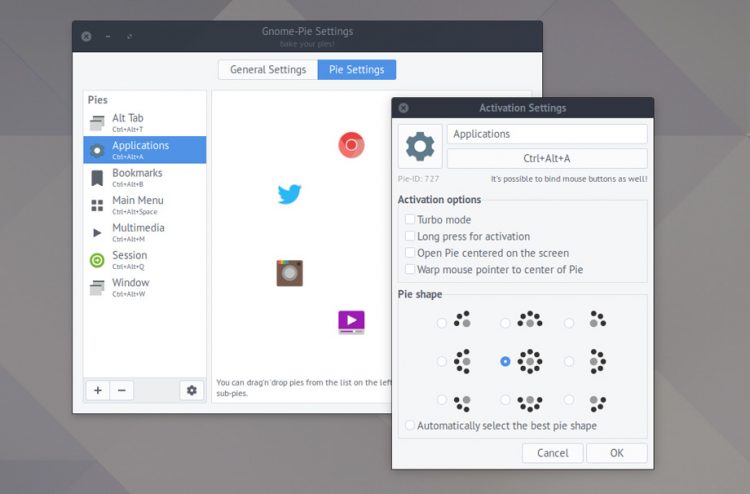 How to Install or Upgrade GNOME Pie on Ubuntu 16.04 LTS +

To install the latest release of GNOME Pie on Ubuntu 16.04 LTS and above you need add the official GNOME Pie PPA (ignore the ‘testing’ in the PPA name as it does contain the latest stable build) to your Software Sources.

Open a new Terminal and run:

If you don’t want to add the PPA you can download an installer directly from the PPA page.